According to recent reports, Samsung plans to ditch its TizenOS for Google’s WearOS. The report claims that it will effect this change with the upcoming Galaxy Watch 4. The Watch 4 should officially arrive later this year, in July or August. Furthermore, the company will not include the blood sugar measuring feature on the Galaxy Watch 4. 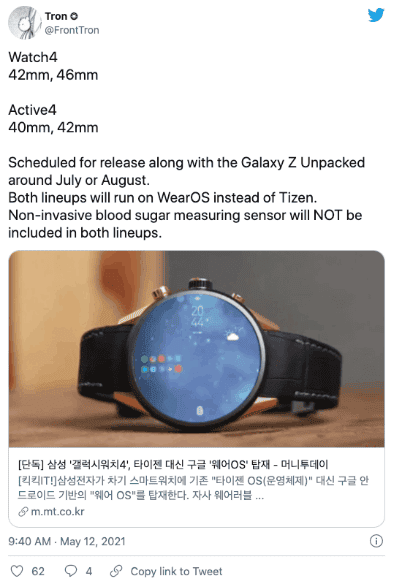 The tweet from @FronTron claims that Samsung is preparing to launch two Wearable devices. The company will release the Galaxy Watch 4 and Galaxy Active 4 this summer. However, both devices will run on WearOS instead of Samsung’s TizenOS.

There are reports that Samsung needs to further develop the blood glucose monitoring function before it hits the public. This is why the company will not have this feature in its coming watches. However, subsequent smartwatches from the company may come with this feature in the future.

For quite some time now, there have been reports about WearOS replacing TizenOS on Samsung’s smartwatches. In fact, the rumored date backs to 2018 when Samsung decided to switch to the Galaxy moniker instead of Gear. There were a bunch of reports claiming that the company might go with WearOS hence the change in the moniker. However, as of now, we are still stuck with rumors.

Why will Samsung want to ditch its own system?

Developing an operating system for devices is not an easy task. The TizenOS has been around for a while but it has never really been successful. Samsung released a couple of smartphones with this system. However, they were never noticed in the smartphone market. The lack of applications is one of the major issues for this operating system. The company had to abandon its TizenOS for smartphones a few years back.

For Samsung’s wearables, the situation is the same. The lack of third-party apps seems to be the major reason why Samsung will go back to Google. However, we expect Samsung to have its own tweaks on the system for much better performance.