To keep Honor from dying and keep it competitive in the market, Huawei sold the brand. Already in the rank of independent, it can return to cooperation with American companies, where the most important are Google and Qualcomm. It seems that the plan worked and Honor will continue to fight in the market on an equal term with its rivals.

The time that has passed since independence, Honor has spent trying to sort out all the formalities and conclude new contracts. It is already known for sure that Qualcomm will begin shipping its chips to Honor. All that remained was to agree with Google to install the GSM version of Android; and you could get involved in a fight in the smartphone market. And the Chinese succeeded.

Well, it looks like the Honor 50 series will herald the return of the GSM version of Android to the company’s smartphones. 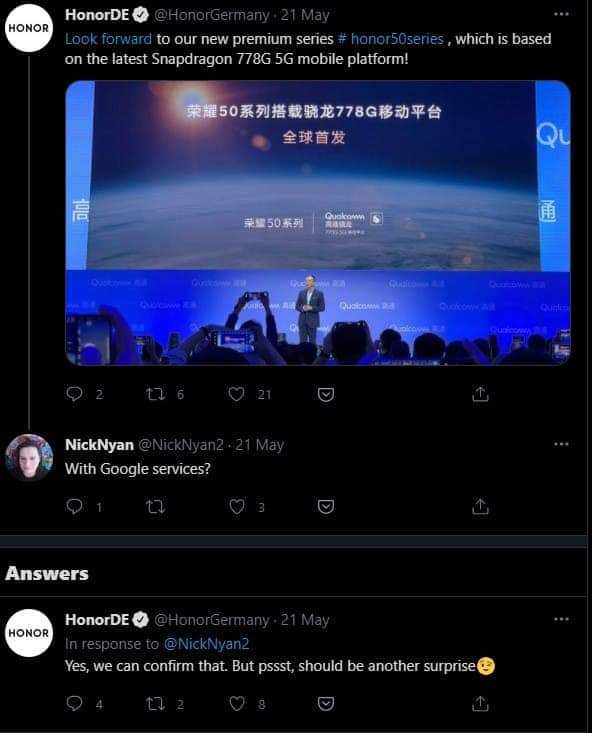 Honor CEO Zhao Ming during the Qualcomm Technologies Summit in Beijing (China) announced that the official presentation of the Honor 50 family, as expected, will take place next month.

In addition, according to Mr. Ming, the Honor 50 will be one of the first commercial smartphones to be powered by the latest Qualcomm Snapdragon 778G 5G processor. The chip contains eight Kryo 670 processing cores clocked at up to 2.4 GHz; an Adreno 642L graphics accelerator and an integrated Snapdragon X53 5G modem.

Also, the Honor 50 Pro and Honor 50 Pro + are rumored to be powered by the flagship Snapdragon 888 processor. The smartphones are credited with having a multi-module camera with a main 50MP sensor; a 6.79-inch AMOLED display with a 120Hz refresh rate and a dual front camera (32+ 8 mega-pixels).

The Honor chief also added that the brand will be announcing a number of flagship devices over the next two months, including devices from the Magic family.