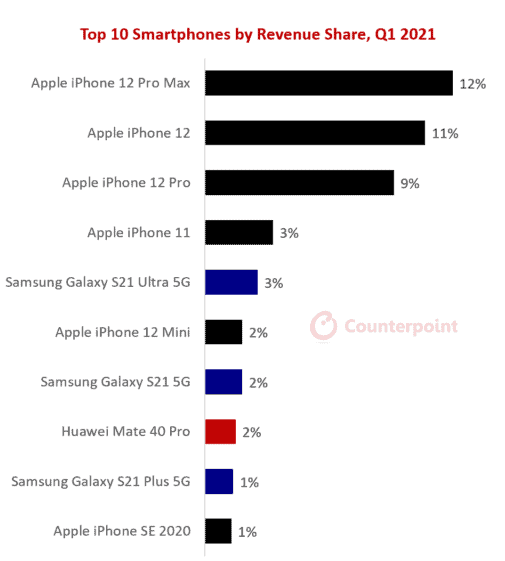 The iPhone 12 Pro Max is Apple’s biggest flagship 5G smartphone. This device was released in September 2019 and it comes with a 6.5-inch display. This smartphone comes with a 3969 mAh battery that supports 18W charging as well as Qi wireless charging. The iPhone 12 Pro Max is one of the best-selling 2020 iPhones. The starting price of this device is just about $1,059

Interestingly, the top three smartphones in the list of revenue-generating devices are from the iPhone 12 series. This shows that Apple’s devices are doing pretty well. Its loyal fans have been quite consistent with replacements of their old iPhones. This is the reason why the iPhone 12 series sales keep shooting up. At some point, the iPhone 12 Pro was the best-selling 2020 iPhone. However, this position is now for the cheaper iPhone 12.

Again, we have another Apple phone but this time, an older iPhone 11. It is surprising to see this device on this list considering that it does not even support 5G. The iPhone 11 is one of two smartphones on this top 10 list that does not support 5G. Interestingly, the other device is still an iPhone. The good iPhone 11 sales are a result of the poor performance of the iPhone 12 Mini which is not meeting up to expectation.

Finally, a non-Apple smartphone on the list, and who else will it come from if not Apple’s rival, Samsung. The Galaxy S21 Ultra 5G was released in January this year and it’s the top flagship in the Galaxy S21 series. It is not a surprise that this device is on this list because its sales have been massive in different markets. It is a force for Samsung and the company is gaining more ground with this flagship.

The shock entry in this list is the Huawei Mate 40 Pro. First off, Huawei has been managing its chip inventory which means that it does not produce enough models for the demand. Nevertheless, this device still racks up huge revenues for the Chinese manufacturer. Interestingly, this device is the only Chinese smartphone on this list.

All the above models except Apple iPhone 11 and iPhone SE 2020 have 5G support. This shows that 5G has become a standard indicator in the high-end market. In terms of sales volume, iPhone 12 was the best-selling model in the first quarter of this year, followed by iPhone 12 Pro Max and iPhone 12 Pro. Last year’s iPhone 11 took fourth place because it is still one of the popular choices for low-cost Apple iPhone users. The presence of the Huawei Mate 40 Pro on the list is a confirmation of the popularity of this device in China.