Cyberpunk 2077 launch wasn’t very smooth, but its partnership with OnePlus keeps going forward. After the OnePlus 8T Cyberpunk 2077 edition, the Chinese firm is bringing yet another Cyberpunk-themed device. This year OnePlus released its very first smartwatch, and now it has revealed the OnePlus Watch Cyberpun 2077 Limited Edition. The company announced this new variant last week, and as scheduled the device went official in China today. Apart from the special design, the new limited edition also comes with a very special holder-cum-charged inspired by Jonny Silverhand an iconic character in the game.

The OnePlus Watch Cyberpunk 2077 Limited Edition is identical to the original OnePlus Watch in terms of specifications. It only differs with regard to looks, price, and, obviously the special holder/charger. Curiously, this wearable was supposed to launch alongside the OnePlus 8T Cyberpunk 2077 Edition. If you recall, the first rumors about the OnePlus Watch emerged last year, but its release got delayed for unknown reasons. We assume that it has to do with the COVID-19 pandemic or even the chips shortage. 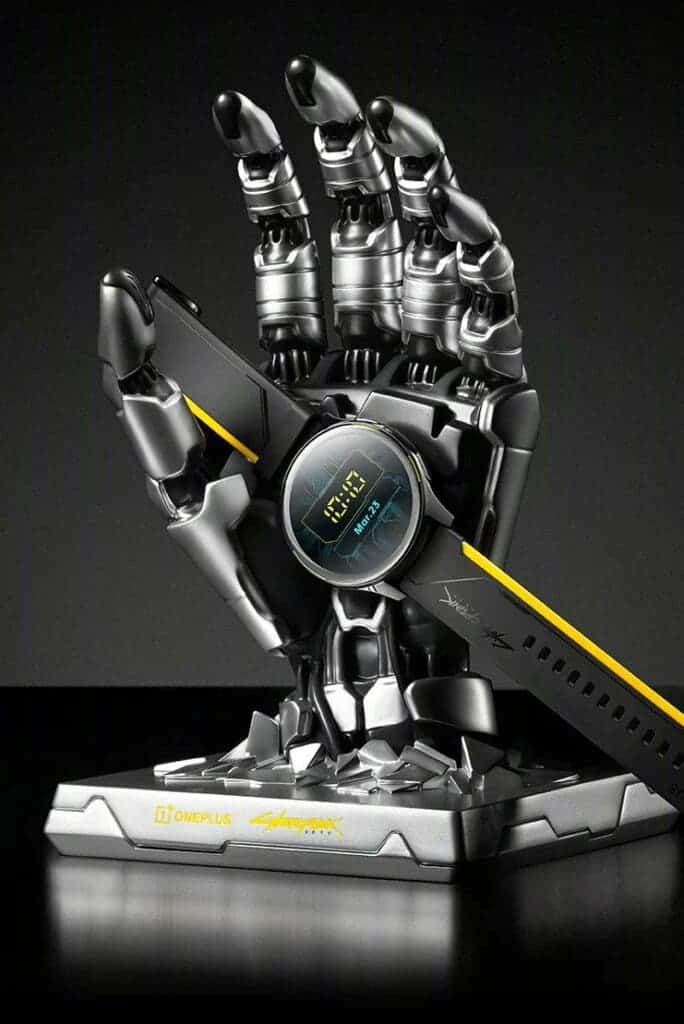 The OnePlus Watch Cyberpunk 2077 Limited Edition currently stands at a price of CNY 1,299 which is just around $202. For comparison, the regular OnePlus Watch retails at CNY 999 which is just around $156. The OnePLus Watch Cobalt Limited Edition still reigns as the most expensive smartwatch from OnePlus with a CNY 1,599 price tag, or $249 if you prefer.

The new smartwatch is already up for pre-order in China. It will be available for purchase on June 1 at 12 AM local time. As of now, there’s no official word on this wearable’s availability outside mainland China which is very unfortunate. After all, the game’s fame is something global. For that reason, bringing it to other markets is a good opportunity for OnePlus to push its smartwatch forward.

The new OnePlus Watch Cyberpunk 2077 Limited Edition comes with a yellow-accented bezel and strap. The latter even has the “Cyberpunk” branding. Moreover, the wearable features Cyberpunk 2077-based UI. Moreover, it comes with special watch faces and boot animation. Curiously, the watch mentions “Android”. For those aware, the OnePlus Watch runs a customized RTOS (real-time Operating System).

The special version smartwatch comes with a holder-cum-charger, which is designed after the hand of “Jonny Silverhand”, a popular character played by actor Keanu Reeves in the Cyberpunk 2077 video game. The game is surrounded by controversy due to the countless bugs present in the console’s versions, but as we mentioned above, everything seems to be fine with the partnership between OnePlus and CD Projekt Red.