Samsung is gearing up to launch a bunch of new competitive smartphones during the next few months. The brand already unveiled a bunch of new Galaxy A and M smartphones this year. Interestingly, many of them came with 5G variants further solidifying the presence of the new network standard among Samsung mid-range smartphones series. While the company is gearing to release a new budget 5G smartphone in the coming months, there are reports about a standard 4G smartphone dubbed Galaxy M22. As expected, it will work as a sequel for the last year’s Galaxy M21. Today, the handset appeared on the GeekBench listing giving us our first bit of information about the new smartphone.

According to the Geekbench benchmark, the new Galaxy M22 will come with model number SM-M225FV. The new handset is powered by the MediaTe Helio G80 chipset. For those unaware, this is a cost-effective Octa-Core chipset that runs with two ARM Cortex-A75 cores clocked at up to 2.0GHz and six power-efficient ARM Cortex-A55 cores clocked at up to 1.8GHz. This chipset is quite powerful for its pricing point and can run everyday apps without any hassle. In fact, it can even run games at moderate settings. The handset that appeared in Geekbench runs with 4 GB of RAM and has Android 11 OS in tow. With that in mind, we know that it will come with One UI 3.1 on top. 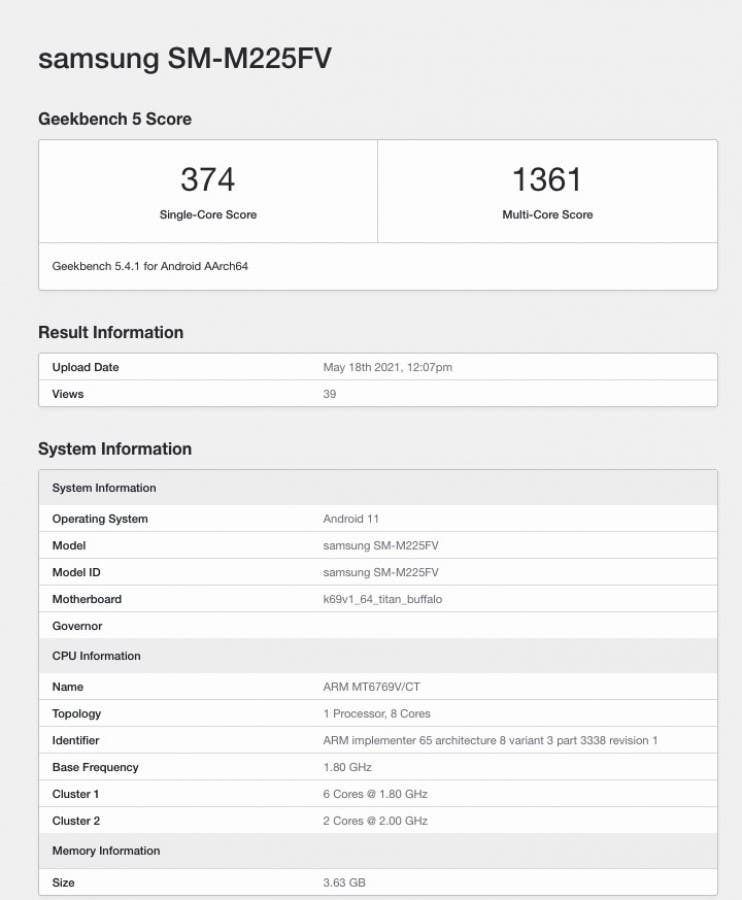 The device score isn’t so impressive but it is on par with other devices featuring this chipset. So far it scores 374 points in the single-core department and 1,361 points on the multi-core test. These numbers are close to what we saw from the yet to be announced Galaxy M32 which also makes use of the Helio G80. This isn’t a big surprise, since the company tends to use the same chipset on multiple smartphones. The differences usually come in the camera department, display quality, battery, and features.

According to the GalaxyClub, the Galaxy M22 will pack a 6.4-inch SuperAMOLED display with a U-shaped notch cutout. The back will house a 48MP primary camera alongside while the battery capacity will match last year’s Galaxy M21 at 6,000mAh battery. The Galaxy M22 will come in Black, Blue, and White colorways. The handset will come to Europe in the coming month with a suggested price tag of €230. Hopefully, the sequel will have a big battery and fast-charging technology.

Next Apple WWDC will begin on June 7, iOS 15 announcement expected