Chinese manufacturer, Huawei, is getting set to unveil its recent smartwatches in a few days. As of today, there are some viral images of the Huawei Watch 3 and Watch 3 Pro. However, we can not ascertain the authenticity of the images for now. Although the source of the images is no longer available, we still have screenshots of the device. It appears that the leak comes from an offline store. 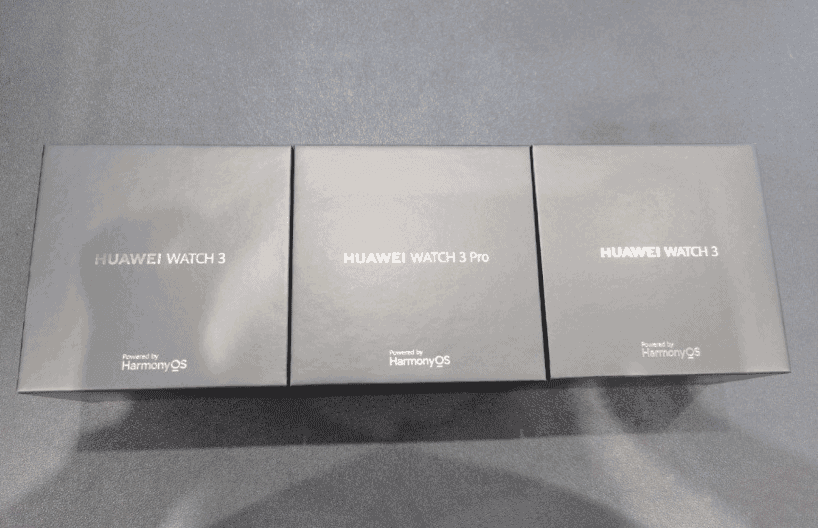 From the reports so far, the Huawei Watch 3 / Watch 3 Pro will support blood pressure monitoring, ECG, eSim cards, etc. Furthermore, these smartwatches will come with the HarmonyOS and it will support independent calls. From the images, we can see the word “Powered by HarmonyOS” on the watch box. This further confirms that this watch will run on the HarmonyOS. The images also reveal that the smartwatch will use a round dial, a leather strap, and supports wireless charging.

The development of the Huawei Watch 3 series has been on for a while. Ahead of the official launch of these devices, they have some relevant certifications. As of now, the Huawei Watch 3 series already have NBTC, Indonesia Telecom, and Russia’s EEC certifications. From the NBTC certification, the model number of this device is GLL-AL04. Furthermore, the NBTC listing shows that this device will support eSIM connectivity. Unfortunately, like other NBTC listings, the amount of information it reveals is limited.

Read Also:  Huawei MateBook D 16 and MateBook 16s will be launched in Europe

Russia’s EEC database and Indonesia Telecom certification show that these devices will arrive pretty soon. In addition to the Watch 3, Huawei Watch 3 Pro also made an appearance on the NBTC website. However, we do not know if Huawei will unveil both devices at the June 2 conference. However, what we know is that both the Huawei Watch 3 and Watch 3 Pro will arrive later this year. The Huawei Watch 3 Pro comes with the model number GLL-AL04. Unfortunately, there is no official information on the possible launch date for the Pro model. Huawei unveiled the Huawei smartwatch HUAWEI WATCH at the 2015 Mate8 conference. Subsequently, the company released the HUAWEI WATCH 2 (and 2018 models) in 2017 and then launched a number of GT series smartwatches. We have also seen children’s watches and a couple of Fit watches.

Next Top 3 "unsolvable" causes of slow 5G adoption in the U.S.