In the next month, Apple will hold one of its biggest conferences of 2021 in the form of the Worldwide Developer Conference. This year the conference will be virtual due to the COVID-19 pandemic, but this will not prevent the company from unleashing news about its software as well as releasing new products. That’s right, the traditional fair centered on developers is now a good place for the Cupertino-based firm to unleash new products. According to rumors, the company will showcase the brand new Apple Silicon during the event. It will reveal new products including a new redesigned Mac Pro featuring its latest ARM64 chip. Today, high-quality, stunning renders, have emerged showing what we can expect from the new computer.

One of the direct benefits of using an ARM platform is the fact that this architecture allows Apple to reduce the size of computers. For that reason, the new Mac Pro is expected to “shrink” significantly and take benefit from the new architecture. However, the performance will be much better than the top versions that arrived with Intel processors some of which are still available for purchase. The MacBook Pro started a new precedent for Apple computers after the very successful reception of the Apple M1. The Mac Pro may another ground-breaking solution, and as usual, Apple wants to deliver performance inside of a very refined package. 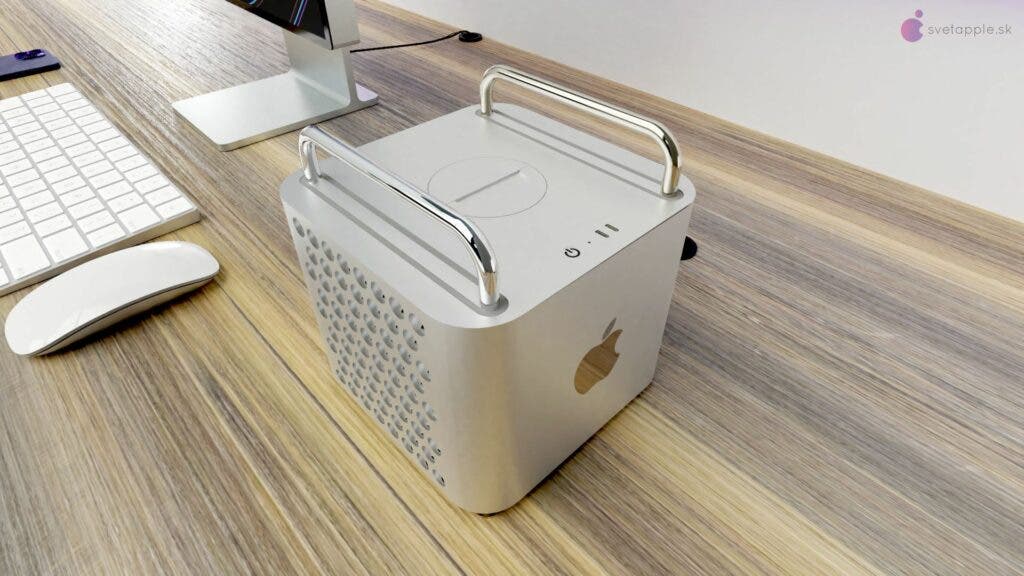 The concept renders shows a new MacBook Pro that looks anything but a traditional computer. Of course, we’re already used to the unconventional design language established by the Mac Pro lineup. The device has two metallic handles in the top. It also brings a power button that seems to be capacitive. Further, there are two Thunderbolt 3 USB Type-C ports. Lastly, the top also has a LED and a slide-out handle to remove the aluminum chassis. 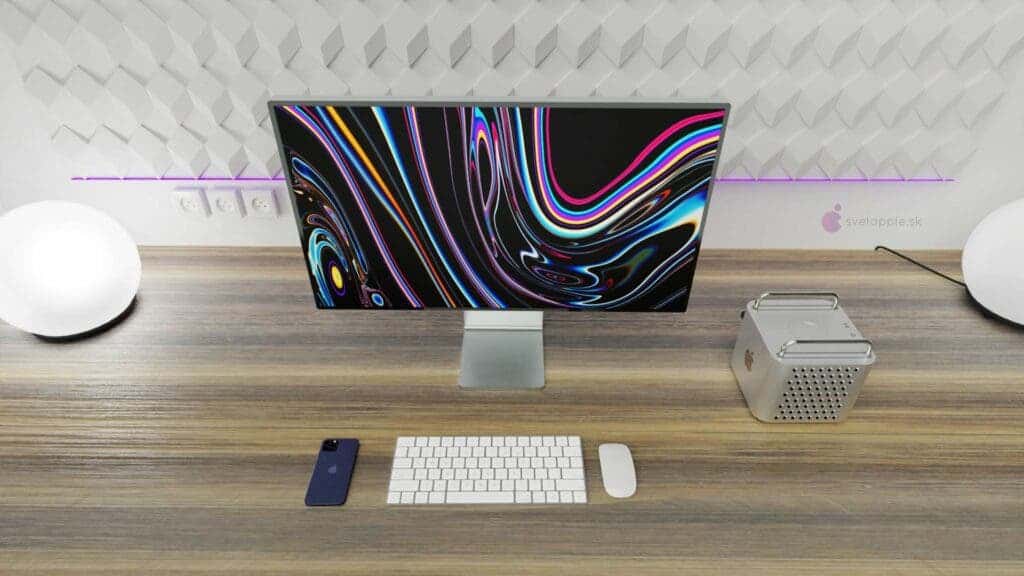 According to the tipster Jon Prosser, the redesigned Mac Pro will be similar to the size of three Mac mini computers stacked o each other. This theory has been used by svetapple. sk to create a new concept that resembles a simple cube with rounded edges. Since this is a MacBook Pro, the creators of the image added a few iconic design elements. Notable elements the handles and the ventilation grill that resembles a cheese grater. Of course, it also has a functional side. For instance, if the temperature inside the aluminum chassis rises significantly, the ventilation grill can drain it outwards. 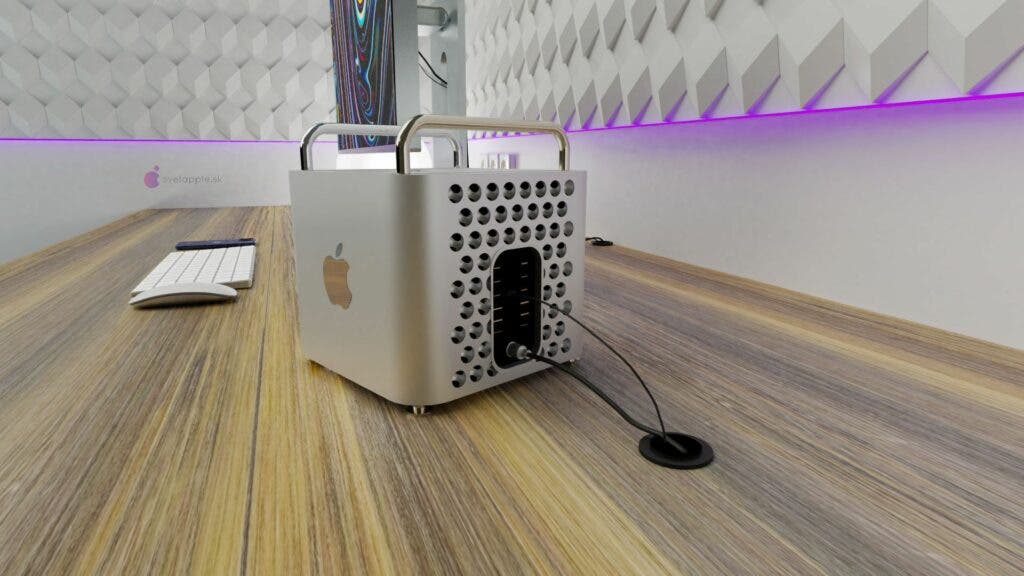 The concept renders reveal a bunch of connectors in the rear part of the structure. It’s the best scenario of connectivity, but of course, we can’t say for sure if this will be on par with the final product. The MacBook with just a single USB-C port tells us a sad story about connectivity. Anyway, this is a Mac Pro so let’s wait for the best. The new product offers 6 x USB-C Thunderbolt 3 ports, 4x USB-A port, 2x HDMI, 2x Ethernet, and 1 MagSafe charging port. 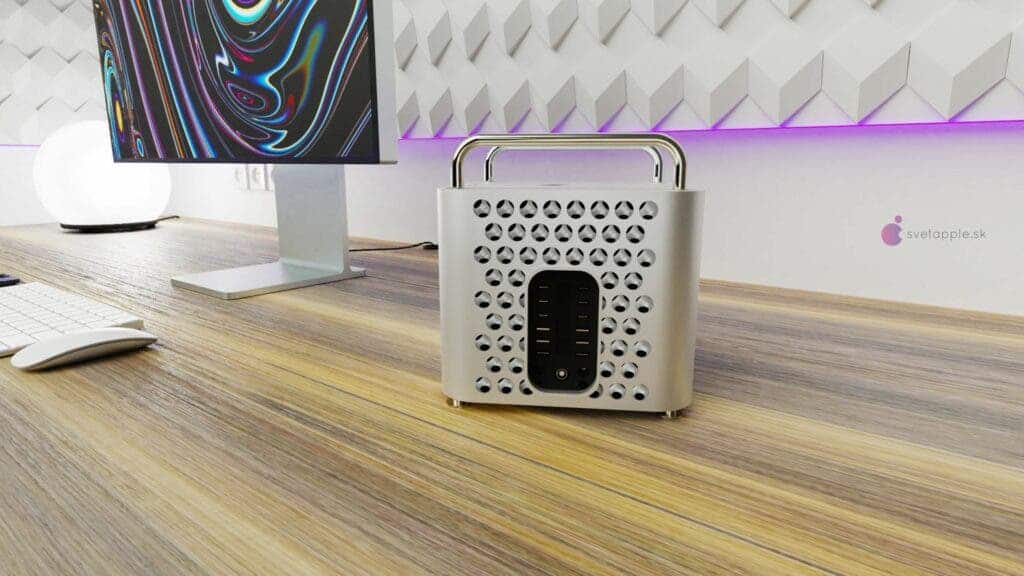 The concept is firmed by four elegant lenses and shares several characteristic elements with the classic Mac Pro 2019. At first glance, it is clear which computer it is referring to. As far as the specifications are concerned, leaker Mark Gurman revealed some tidbits about the new product recently. 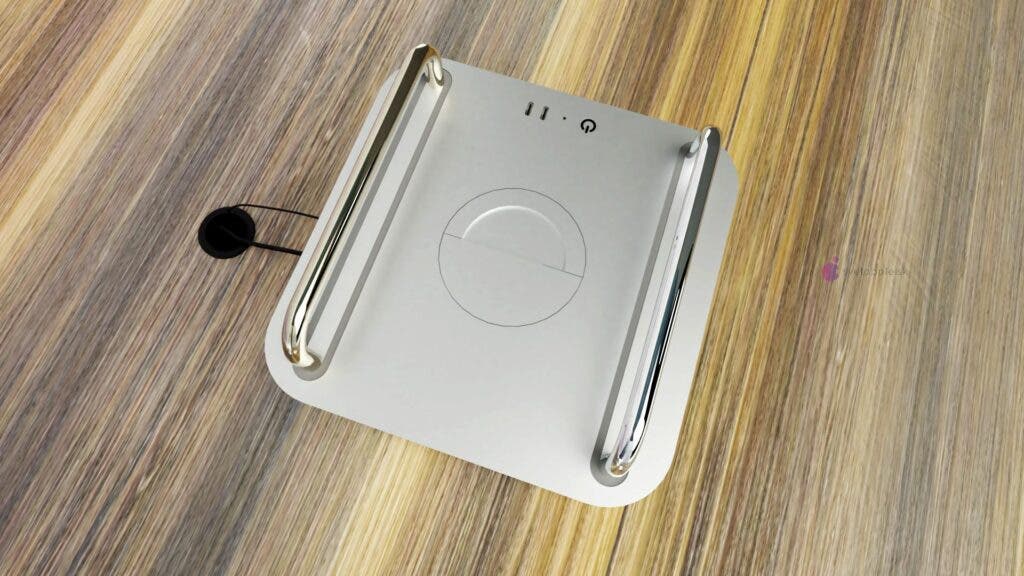 As per the rumors, Apple’s new computer will be truly a powerhouse

According to him, the redesigned Mac Pro will come in 20 or 40 computing core variations. They will be made up of 16 high-performance or 32 high-performance cores and four or eight high-efficiency cores. The chip will also include either 64 core or 128 core options for graphics. The computing core counts top the 28 core maximum offered by today’s Intel Mac Pro chips. The higher-end graphics chips will replace parts now made by Advanced Micro Devices Inc.

We expect more details and leaks to appear in the coming days ahead of Apple WWDC 2021, so stay tuned. Anyway, what you think of a product with this design? It looks very elegant and different, in my humble opinion, what you think about it?