Xiaomi’s MIUI is currently releasing its latest MIUI 12.5 update for its smartphones. The first batch of devices (mostly its recent flagships) already have this update. This afternoon, MIUI officially announced the second batch of devices to get the stable update. The company also revealed that the stable version of MIUI 12.5 is being gradually rolled out gradually to these devices. 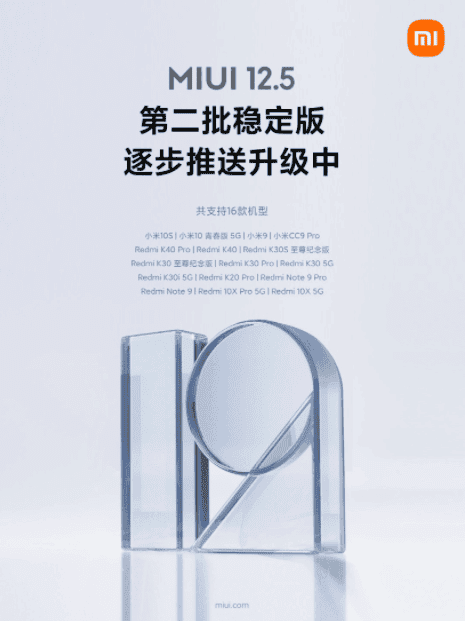 According to Xiaomi, the second batch of devices to get this update includes

The MIUI 12.5 system was officially released at the Xiaomi Mi 11 new product launch conference in December last year. MIUI 12.5 also brings MIUI+, users can view mobile notifications on the computer. Users can also copy texts on the mobile phone and paste them directly on the computer. In addition, it allows users to directly access screenshots taken on the smartphone from the computer.

According to Xiaomi, MIUI 12.5 brings a new light cone motion effect architecture with a more immersive translucent motion blur, new super wallpapers, new notification system sounds, more delicate vibration touch, and “One more thing” MIUI+ collaboration function. Xiaomi released the latest generation of the MIUI 12.5 system in December last year. The company also claims that this upgrade is no less than a major version update. In terms of fluency, the company also claims that the system memory usage drops by an average of 35%. Furthermore, the power consumption also reduces by 25%.

According to reports, Xiaomi’s proprietary MIUI skin is very far from perfect. A lot of users have been patient but it appears that their patience is running out. MIUI encounters defective firmware, incessant interruptions in the quality updates, inefficient updates, privacy issues, controversial ads. Furthermore, MIUI has a lot of features that are exclusive to the Chinese market. This is not acceptable with global users.