Chinese manufacturing giant, Xiaomi, has been working on the MIUI 12.5 update for quite some time. Many of its devices have been receiving the beta version of this update. However, there is a new report regarding the MIUI 12.5 update. This morning, Xiaomi MIUI officially announced that it is now rolling out the first batch of MIUI 12.5 stable version. Of course, this update will roll out to Xiaomi smartphones in batches. Thus, we do not expect all Xiaomi smartphones to get the MIUI 12.5 stable version at the same time. 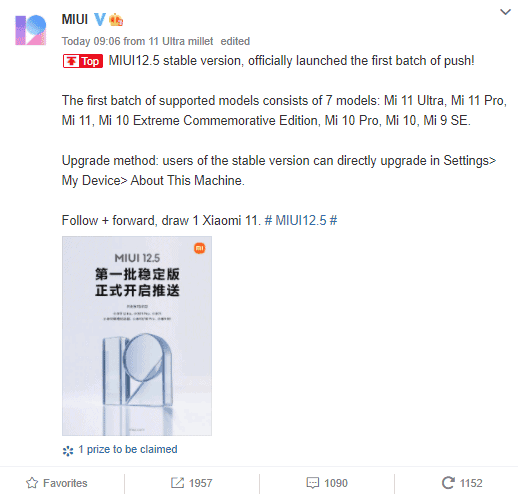 According to Xiaomi, there are seven (7) devices in this first batch. The smartphones are Xiaomi Mi 11 Ultra, Mi 11 Pro, Mi 11, Mi 10 Ultra, Mi 10 Pro, Mi 10, and Mi 9 SE. So basically, it is the Mi 11 series, Mi 10 series, and Xiaomi Mi 9 SE that are getting this update for now. These are Xiaomi’s latest flagships over the past two years. It is not entirely a surprise that they are the first to get the MIUI 12.5 stable update.

Unfortunately, the official did not mention the regions that this update is currently rolling out. However, we all know that OTA updates usually roll out gradually. This means that all the units in these series will not get the update at the same time. If you have not gotten the OTA prompt, don’t worry, it will arrive in the coming weeks. Alternatively, you can go to Settings – My Device – About this phone to check for new system updates.

At the launch of the Xiaomi Mi 11 in December last year, Xiaomi also released the MIUI 12.5 system. This new system from Xiaomi also brings MIUI+, which has some more features. With this system, users can view mobile notifications on their PCs as well as copy text on the mobile phone and paste it directly on the computer. In addition, MIUI+ users can also copy a screenshot on their smartphones and paste it directly on their computers. Simply put, MIUI+ makes the collaboration between the smartphone and PC seamless.