According to recent reports, Realme has a mysterious new phone that recently hit the web. The report shows that this smartphone will come with a 6.55-inch FHD resolution OLED high refresh rate screen. This device will also use a 2,200 mAh dual-cell battery which is equivalent to 4,400 mAh. Furthermore, the report shows that the dimension of this device is 159.9 x 72.5 x 8mm and it runs on Android 11. However, there is no information on the processor of this smartphone. However, there are reports that this device could use the new Snapdragon 778G or Snapdragon 870 SoC. 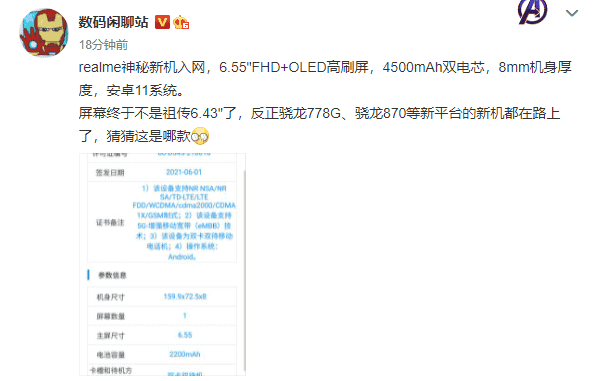 Realme recently stated at the Global 5G Summit that by the end of 2022, it will provide more than 20 5G mobile phones. The company’s goal is to reach 100 million active 5G mobile phone users by 2024. It seems that this new smartphone is one of Realme’s next 20 5G phones. We expect the Chinese manufacturer to release more 5G devices before the year runs out. 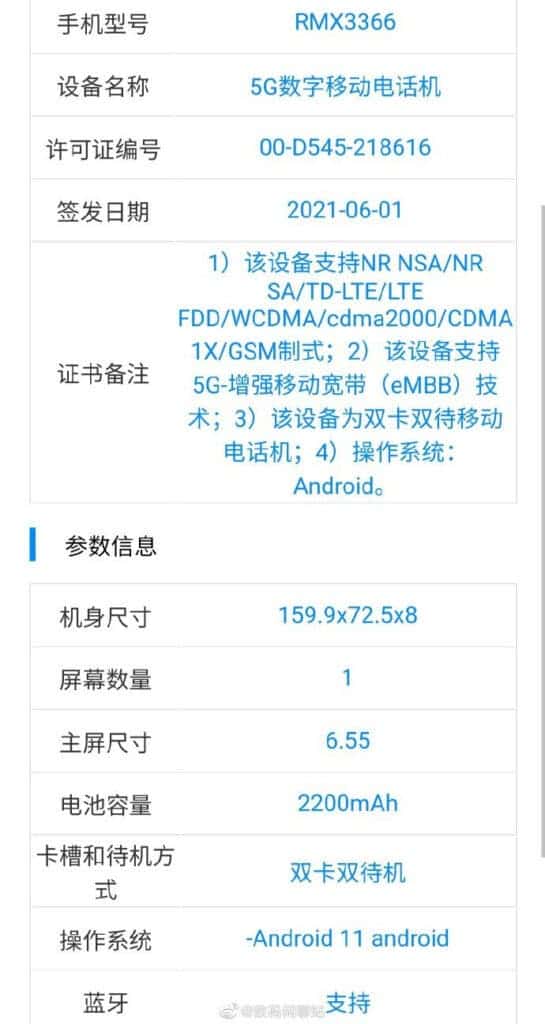 Realme recently jointly organized the Global 5G Summit with Qualcomm, a well-known analysis agency, Counterpoint, and Global Mobile Communications Association (GSMA). In the keynote speech at the summit, Realme announced that by the end of 2022, it will provide more than 20 5G mobile phones. In the next three years, the company plan to have no less than 100 million active 5G mobile phone users.

Madhav Sheth, vice president and CEO of Realme India and Europe, said, “We believe that in the 5G era, it is an important mission of Realme to accelerate the promotion of 5G technology to the entire population. We will make every effort to popularize 5G applications and make more 5G devices while listening to the needs of consumers, promote product innovation, and work with our industry partners to help build a broader 5G ecosystem.”

The focus of the Realme brand is still low-priced 5G mobile phones. In the next few years, the company will unveil cheap smartphones including 5G smartphones below 600 yuan ($94).  Realme also revealed its plans to launch two new GT series models soon. One flagship device focusing on performance will be unveiled later this month, and another flagship smartphone focusing on taking pictures will be unveiled in July. Furthermore, there are reports that Realme will set up seven 5G R&D centers in Asia, Europe, Africa, and South America, and will use 90% of the company’s R&D resources and approximately 1.92 billion yuan (about 300 million) in R&D funds for the development of 5G products.