Samsung is working to eliminate several vulnerabilities that could potentially allow hackers not only to spy on smartphone users, but in some cases to completely take control of mobile devices.

Security holes were discovered by Oversecured founder Sergey Toshin. According to him, about ten, more precisely, “more than a dozen” vulnerabilities of various levels were found.

Some gaps allow you to intercept SMS messages (by tricking the user into certain actions), others are much more invisible and more dangerous and do not require any action on the part of the victim. Thanks to them, hackers can get all kinds of permissions on the device and read/write files.

Due to the severity of the vulnerabilities and because it will take Samsung up to two months to fix them, no details about the software flaws was reported. We do not even know which devices and operating system versions are at risk. According to reports, some of the vulnerabilities exists in applications that come with the devices out of the box; that are not necessary for the correct operation of Android.

In some cases, third-party applications can gain administrator rights on the device – at the cost of removing all other programs from it. This particular bug (number CVE-2021-25356) had already a fix in April of this year and concerns the Managed Provisioning application.

In general, users should regularly update their smartphone firmware. They can easily check the availability of new versions in the device settings. 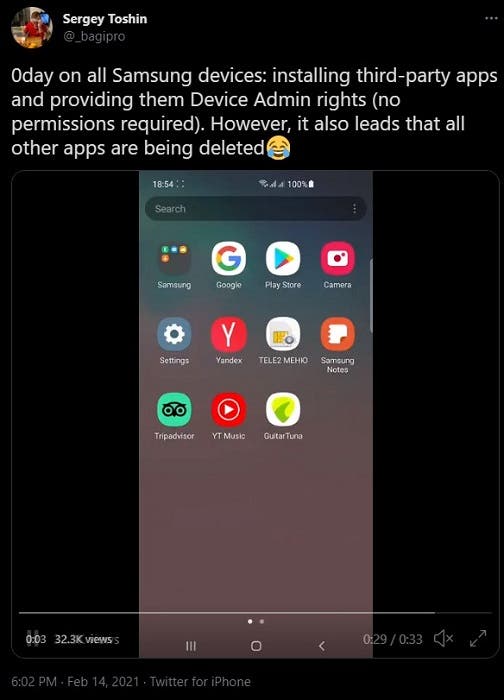 Samsung to reveal 5G and 6G advances in two weeks

On June 22, Samsung will host an event about 5G technology. It is possible that in its course a statement will take place about the next, sixth-generation cellular communication.

Although the event was initially for new solutions in the field of 5G; according to some reports, Samsung may also introduce 6G; a technology that has been in development by the company for a long time. “At the event, Samsung Electronics will demonstrate its leadership in the evolution of next-generation networks,” Samsung said.

Back in 2018, the head of Samsung Electronics Lee Jae-yong chose 5G as one of the four main engines of future growth and promised to invest about $ 22.5 billion in the development of the industry over the next three years. Samsung hoped to occupy 20% of the global 5G market. According to analysts from Dell’Oro Group, in 2020 in the market of relevant technologies; the company was in seventh place with a share of 2%; it entered the 5G market rather late, which was already dominated by Huawei, Nokia, Ericsson and ZTE.

At the same time, the company was preparing the development of 6G technologies. In May 2019, Samsung commissioned the Advanced Communications Research Center to tackle this issue. It is working on 5G and 6G services with universities and research centers both in Korea and overseas. Last July, the documentation talks about the implementation of the new standard – 6G: The Next Hyper-Connected Experience.

Next Xiaomi Mi Pad 5 series will use only one processor