Since the last year, we’ve been seeing a certain movement from Realme indicating that the brand want is much more than a mere smartphone maker. In fact, the company entered a set of new categories last year. It already has smartwatches, true wireless earphones, and even smart TVs. Now, the company wants to give a step further, a step that technology enthusiasts and Realme fans will certainly appreciate. The company has announced that it is definitively entering the segment of laptops and tablets on June 15. The first Realme Laptop, or Realme Book, will be announced alongside a new tablet during Realme GT 5G global release.

We've been working and hinting about some exciting new product categories.
Get ready for another surprise coming up at the #realmeGT Global Launch!

I know you all have guessed it. Do reply with your answers. pic.twitter.com/6J6WeTNZqE

Realme hopes to bring more leap-forward products with trendsetting designs. Everything with the usual “lifestyle” approach and appeals to a younger audience. The company states that all its upcoming laptops and tablets will be deeply integrated with Realme smartphones and AIoT products in order to provide a unified and seamless user experience.

Yesterday, the folks at Android Authority exposed a set of leaked renders based on Realme’s first laptop prototype. The design quite resembles what we can see on the Apple MacBook series. The report also suggested that the laptop will offer a 3:2 aspect ratio with super-thin bezels. Realme is adopting a sleek approach with a display that size that probably sits between 13 and 15-inches. We expect a Full HD resolution at the very least. The device will feature an aluminum body which makes it feel more “premium”. Despite this premium look, we assume that Realme will bet on the cost-effective segment that has made its name across the world.

The laptop brings dual speaker grills under the body and that suggests a stereo sound experience. The prototype runs Windows operating system, which is hardly a surprise. Moreover, the report also suggests that the Realme Book will arrive with USB-C charging support. The 65W fast-charging technology present on many Realme smartphones will probably be used to fuel this laptop.

Unfortunately, details about the Realme Pad are still scarce. The only leaked image that appears to be from the upcoming online event suggests a device that is very thin. Moreover, the device seems to feature an aluminum body with protruding cameras. 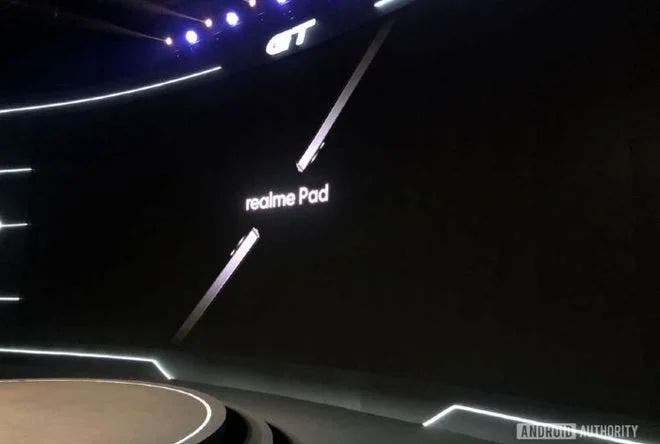 We assume that Realme’s first tablet will be placed in an intermediary category with a premium mid-range chipset. However, there still room for surprises since we know just a little about this handset.

Realme is bringing the Chinese Realme GT to global markets, there is no doubt about that. After many rumors, the company is finally bringing its Snapdragon 888-powered smartphone. Realme’s press release calling its fans to the June 15th event clearly states “Another GT is coming”. If this is just the GT we all know, why Realme is saying that another GT is coming? Could this be the camera-centric flagship that Realme teased some months ago? We’ll have to wait to find out. Anyway, this device is rumored to bring a 108MP camera and a MediaTek flagship SoC, presumably the Dimensity 1200 SoC.

The Realme Book, Realme Pad, and new Realme GT smartphones will be disclosed on June 15th at 5:30 PM IST. You can expect all details to be covered here.

Previous Huawei MatePad 11 with HarmonyOS gets an official launch date