As early as July 2021, there were reports that OnePlus will launch its own tablet. At the time, the company also applied to the European Union Intellectual Property Office for the “OnePlus Pad” trademark. In a recent tweet, there were reports that OnePlus is indeed developing its own tablet. The tweet from Max Jambor, editor at “AllAboutSamsung” claims that the tablet will launch next year. As exciting as the report may sound, not all are so enthusiastic. Popular leakster @rquandt used so pretty strong words to describe the OnePlus tablet. 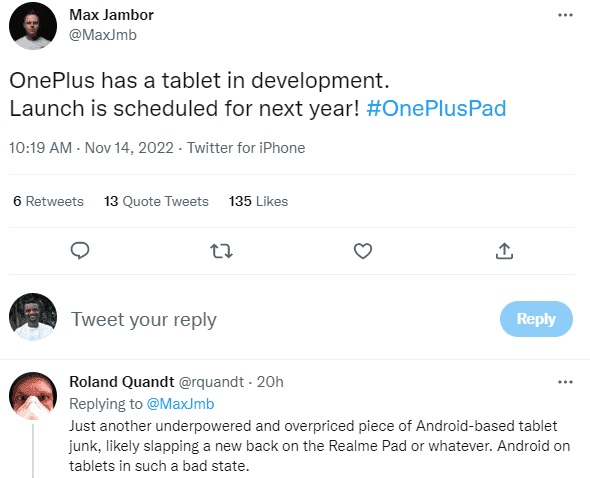 In response to Max’s tweet, Roland said “Just another underpowered and overpriced piece of Android-based tablet junk. Likely slapping a new back on the Realme Pad or whatever. Android on tablets in such a bad state”.

OnePlus tablet may copy Oppo Pad in many aspects

There are speculations that the OnePlus tablet may be based on OPPO Pad. After all, the two companies have now merged. This means that they both share patents and resources. The Oppo Pad was released in February this year. It comes with the Snapdragon 870 SoC as well as an 11-inch LCD display. The display supports a resolution of 2560 x 1600 and a refresh rate of 120Hz.

At present, in the high-end tablet market, only Samsung’s Galaxy Tab series can compare with Apple. However, Google will soon launch the Pixel Tablet to join the competition.