Recently, we were talking about the apps that track most user data. Facebook and WhatsApp were on the top. A similar report was provided recently by a digital privacy software company, Clario.

Agree that we install myriads of apps on our smartphones that we don’t use frequently. But those apps have a concrete goal to collect various data about our activity. The developers prove they need this data to provide a better service or display more relevant ads. But are you sure those data won’t be used for other purposes? 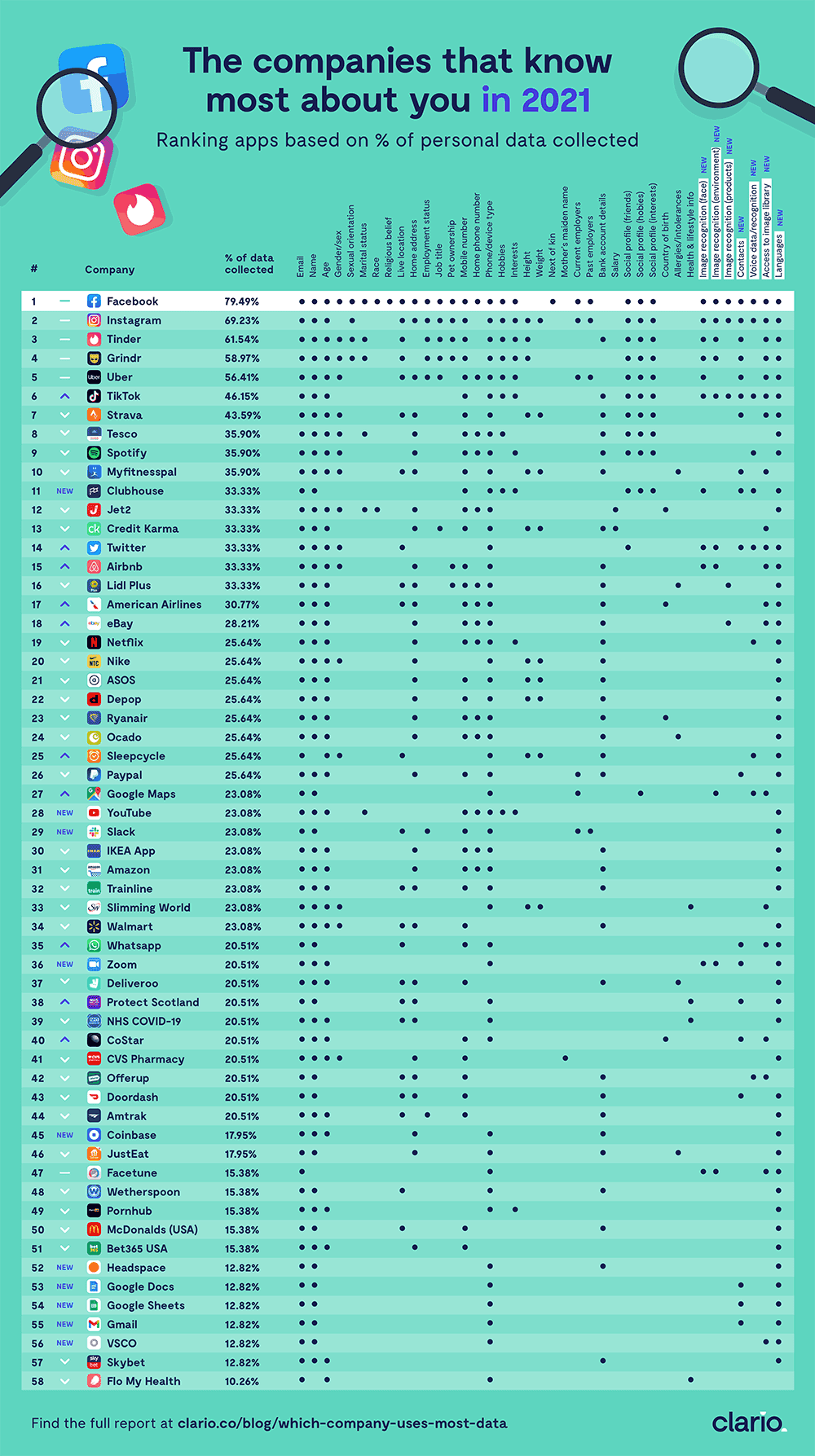 Apple has already made some major changes in its operating systems. And starting from iOS 14.5 users will allow this or that app to collect their data. Of course, most users refuse this and those changes made many developers cry. Facebook was the most suffered company out there. We repeat Facebook’s name over and over. But is this platform the most data-hungry app?

As we can see, the previous assumptions that Facebook has no equals in terms of user data tracking and collection are true. Moreover, TikTok, Instagram and Facebook are considered to be the worst apps for collecting and tracking your data including your face and voice data. This is quite interesting because yesterday we were talking about the strategy that Apple is going to use in iOS 15. We said that Apple will kill the passwords in favor of Face ID, Touch ID and security keys. Thus, it turns out the data leaks are not going to disappear but they are going to be modified. Instead of passwords, hackers will sell users’ biometric data. 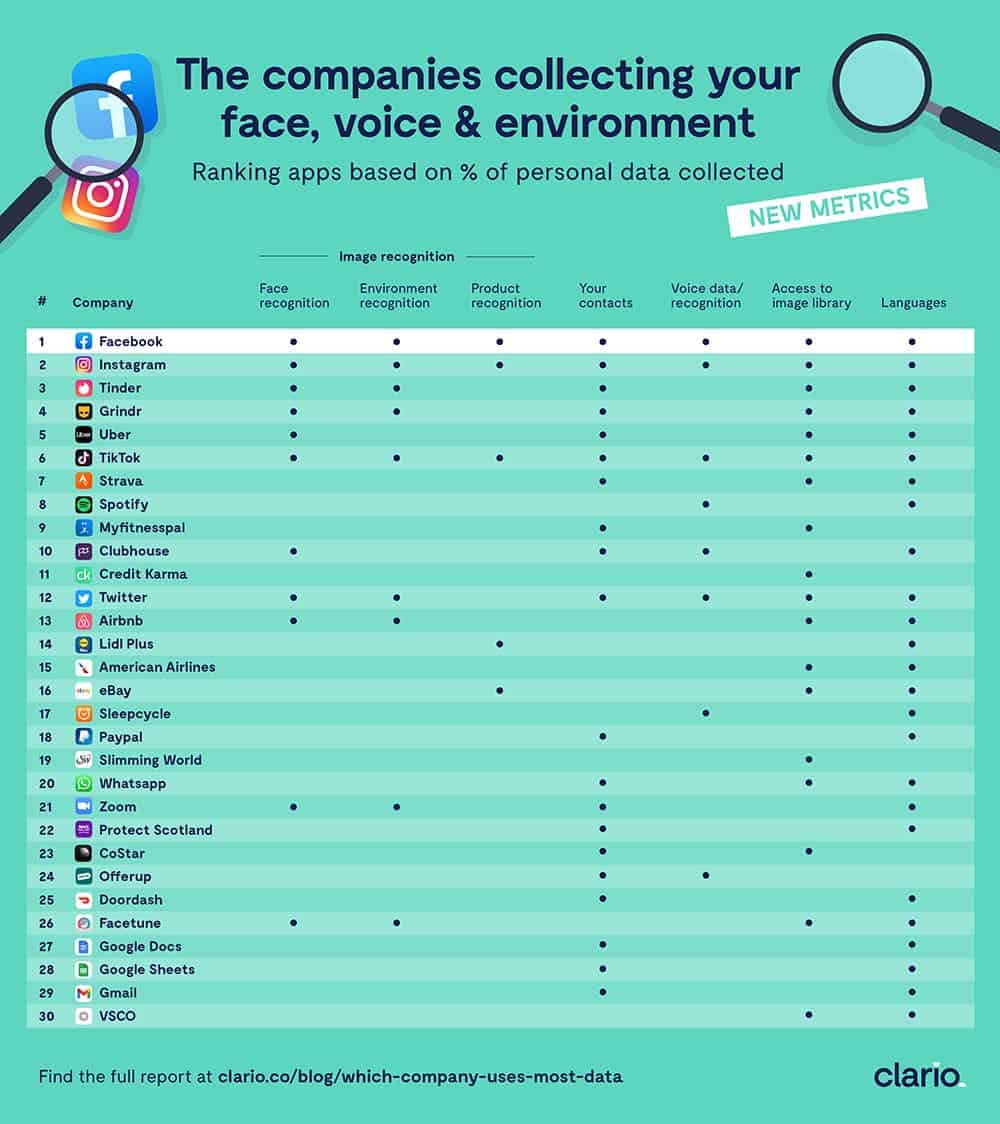 In this sense, Facebook is at the top as it tracks our personal appearance, voice recognition, environment recognition and our contacts. All these data help the company to identify people and their key attributes to help them log on to devices. This is also true for Instagram. These apps use facial recognition to let you know when you appear in photos or videos but haven’t been tagged.

Not surprisingly, TikTok is among those apps that collect the most data. 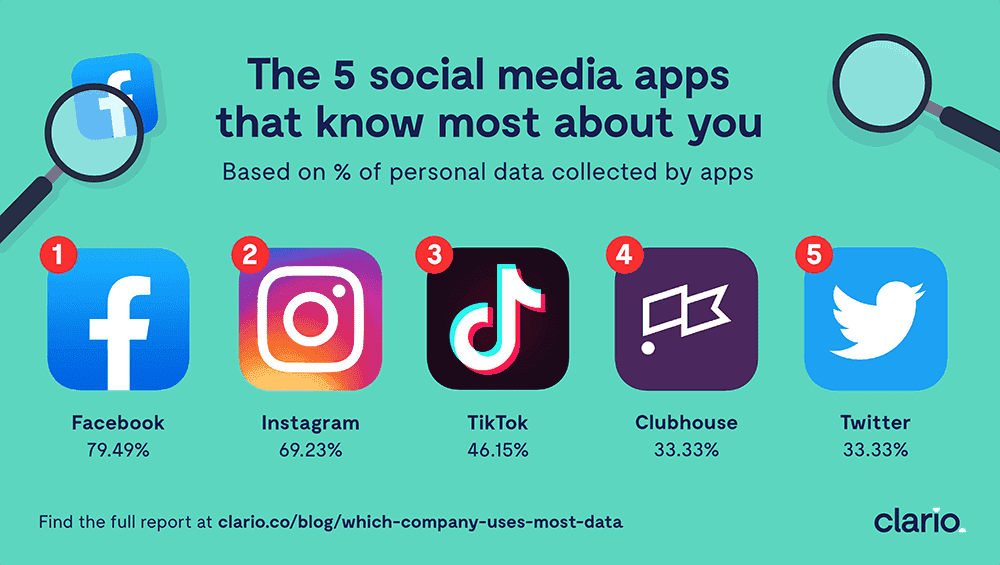 But as said, these data is not used for the initial purpose only. Facebook needs much data to display better ads. From the latter, Facebook gets $16.6 billion a year.

But what made us surprised is that Amazon which is the biggest online retailer company on the globe collects only 23.08% of your data. Thus, for doing business and succeeding, not that much data is required.