For those unaware, the company’s Narzo lineup which started last year comes for the “younger audience” or “young players”. In less than 12 months, the series already has more than 5 million users across the world. Of course, the Indian market accounts for a large portion of this mark. Now, the numbers are set to keep growing as the two new smartphones will reach India.

The Realme Narzo 30 and Narzo 30 5G aren’t mind-blowing smartphones in terms of specifications. The 4G LTE vanilla smartphone carries the MediaTek Helio G95 chipset which is meant for gaming. The chipset has two ARM Cortex-A76 cores clocked at up to 2.05GHz plus six ARM Cortex-A55 cores clocked at up to 2.0GHz. This chip isn’t the most power-efficient since it is based on the already old 12 nm standard. The smartphone also carries a triple-camera setup, but only the main 48MP camera is really useful here. Realme equipped the Narzo 30 with a massive 5,000mAh battery which also has a very satisfactory 30W charging system. The device is available with 6GB of RAM and 128GB of Internal Storage.

The Realme Narzo 30 5G has a 6.5-inch 90Hz LCD with Full HD (2,400 x 1,080) resolution. Under the hood, the smartphone brings the MediaTek Dimensity 700 chip boasting a more efficient 7n m fabrication process. The Narzo 30 5G has 4GB of RAM and 128GB of Internal Storage. The camera setup is identical with a main 48MP camera and two 2MP modules for depth sensing and macro shooting. It also boasts a 16MP selfie snapper.  The Realme Narzo 30 5G draws power from a huge 5,000mAh battery with 18W fast-charging support. 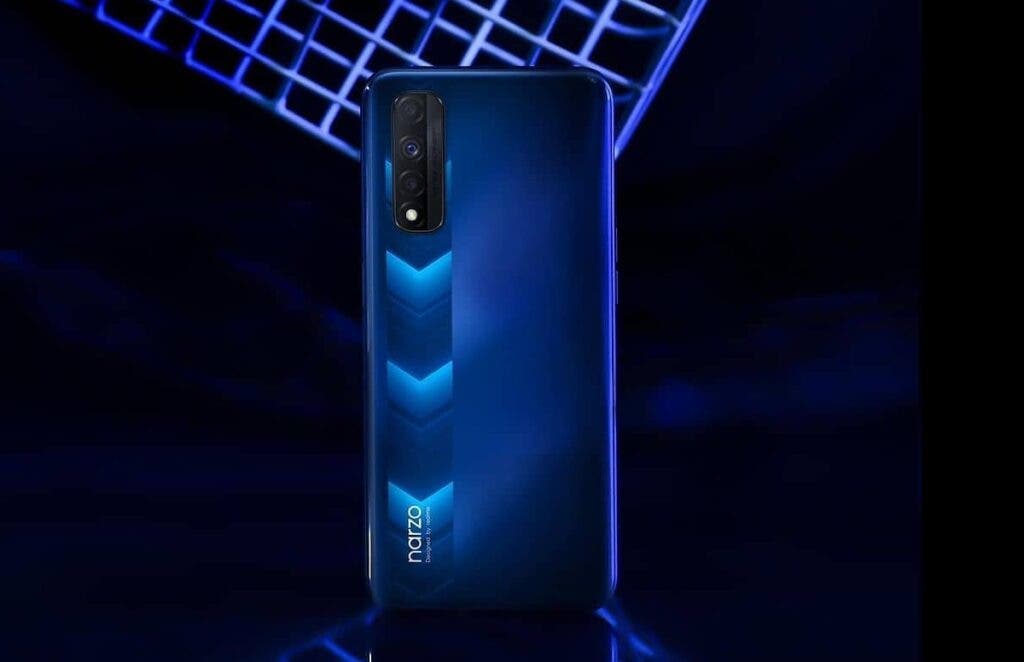 Both devices have support for microSD cards and come with Android 11-based Realme UI 2.0 straight out of the box. The Narzo 30 5G will join the growing list of 5G smartphones in India.

The Narzo 30 will cost around INR 9,999 in India, while the Narzo 30 5G should sit under the INR13,999 shadow. That’s the price of the Realme 8 5G which has similar specifications but a different design.

Next Samsung Galaxy M32 will arrive on June 21