Realme already launched plenty of flagship smartphones before, but for this year, the company decided to take an alternative route. Rather than releasing devices that were more premium such as the last year’s Realme X50 Pro, the company decided to return to its roots of flagship killer nature. In March, the company introduced the Realme GT 5G in China as the cheapest smartphone featuring the Qualcomm Snapdragon 888 SoC. Several months later, and after many teasers, the company is finally introducing this jewel of affordability in  Europe. The flagship comes in two memory combos and super aggressive pricing that starts from €369.

The Realme GT 5G flaunts a 6.47-inch AMOLED display with a 120Hz refresh rate and an FHD+ resolution (2,400 x 1,080 pixels). The panel supports HDR10+ and has a top-left-aligned punch hole comprising a 16MP selfie shooter. Moving around to the back, it brings a Triple-Camera setup. The rectangular island comprises a 64MP primary shooter, an 8MP ultra-wide-angle camera, and a 2MP macro shooter.

Under the hood, the smartphone boasts a Qualcomm Snapdragon 888 SoC paired with 8GB of RAM or 12GB of RAM. These variants are combined with 128GB and 256GB of storage respectively. Unlike other Realme phones, you can’t expand the storage of this beast. Other notable features include Wi-Fi 6, Bluetooth 5.2, NFC, 3.5mm headphone jack, in-display fingerprint scanner, and stereo speakers

The device draws power from a 4,500mAh battery complete with 65W fast-charging support. On the software front, the device runs Android 11 with Realme UI 2.0 running on top. 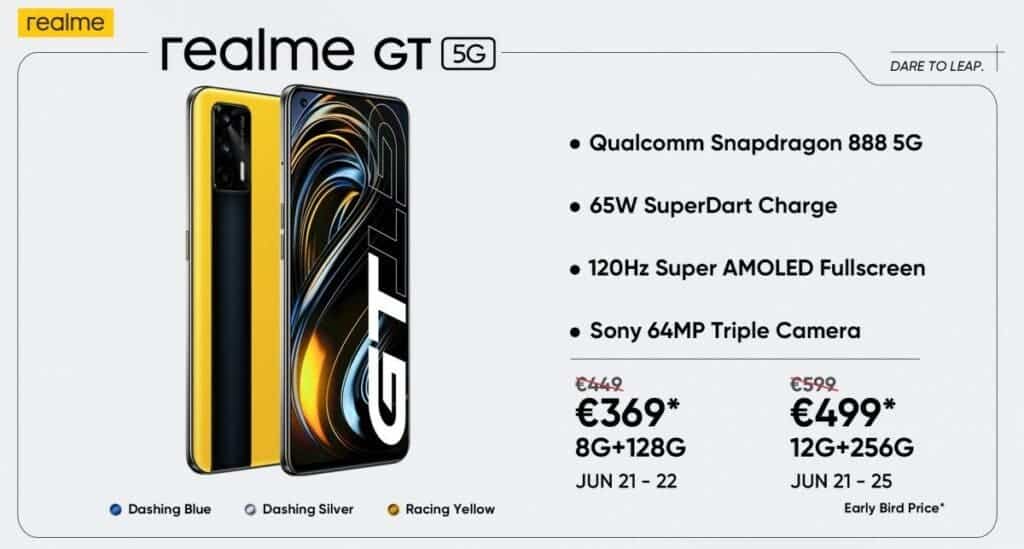 The Realme GT will start selling on June 21. The variant with 8GB of RAM and 128GB of Storage is the one that costs €369. However, this is an early-bird price that will be available only in the first four days through AliExpress. The high-tier variant with 12GB of RAM and 256GB of Internal Storage costs €499 and will sell through Amazon during Prime Day until June 22. Once the deals are over, the price will go to €449 or €599, for the entry and high-end variants respectively. The device will be available at all major retailers across Europe.

The “early-bird” prices are very aggressive and the best opportunity to get a “cheap” Snapdragon 888-powered smartphone. However, even at the full price, the devices are still affordable for what they do offer. The device is available in Dashing Blue, Dashing Silver, and Racing Yellow colorways. 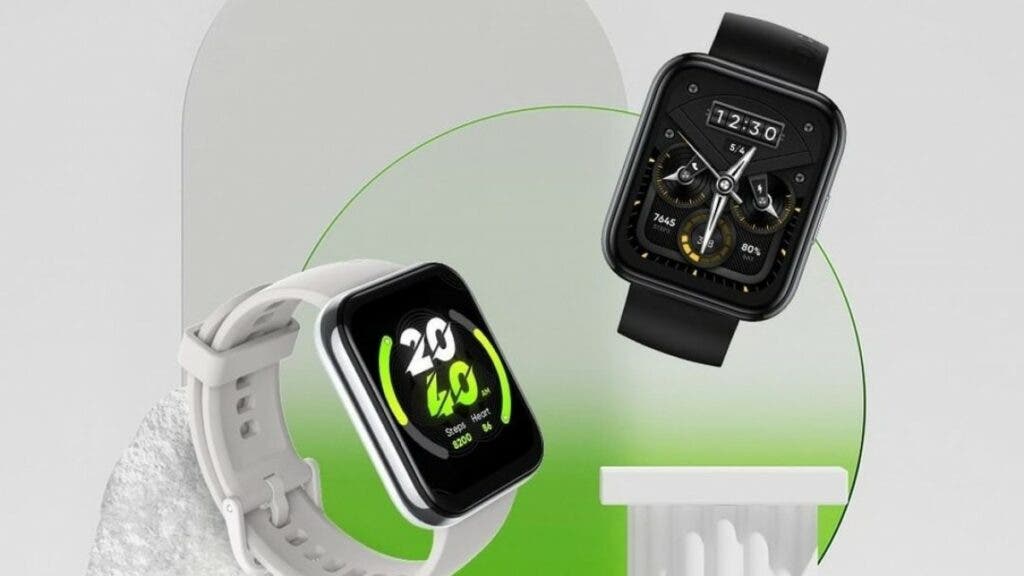 The Chinese firm also took the opportunity to unveil the Realme Watch 2 and Watch 2 Pro in Europe. The new upgrades will be priced around €55/£50 and €75/£70. Customers can purchase them through Amazon starting tomorrow, June 16. 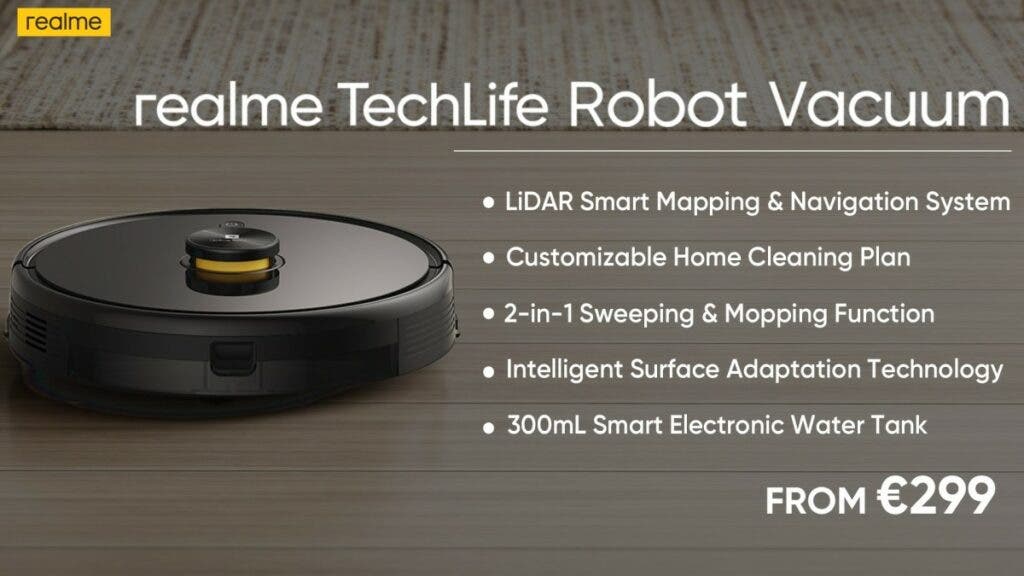 The Chinese firm also took the opportunity to unveil a new AIoT device. The Realme TechLife Robot Vacuum is the first device to come under the TechLife brand. It brings LiDAR mapping and navigating, 2-in-1 sweeping and mopping function, and “intelligent surface adaption technology”. The vacuum offers 3000Pa suction power, comes with a 600ml dust bin, 300 ml water tank, and a 5,200mAh battery.

The new Robot Vacuum will be up for pre-orders on AliExpress starting tomorrow. The price tag is set at €299.

Previous What is the best screen recorder for Windows 10?

Next Video : Take a look at cameras of Ulefone Armor 11T 5G