Counterpoint Technology Market Research has released fresh statistics on the global tablet market. The demand for these devices continues to set records, aided by the pandemic, which provoked a sharp need for additional computing equipment.

It is noted that in 2020, tablet shipments increased by 19% compared to the previous year. At the same time, a five-year maximum of shipments was recorded in the last quarter of last year.

In the first quarter of this year, the demand for tablets soared one and a half times – by 53% year on year. However, compared to the last quarter of 2020, a 22 percent decline was recorded, which is explained by the seasonal factor.

Apple is the undisputed market leader with a 37% share versus 30% a year earlier. Samsung is in second place. The South Korean giant has strengthened its position from 16% to 20%. Lenovo closes the top three with 9% versus 5% a year earlier. The share of Huawei has dropped significantly.

Thus, the four named companies together hold approximately two-thirds of the global market. The total share of all other manufacturers is less than 30%. 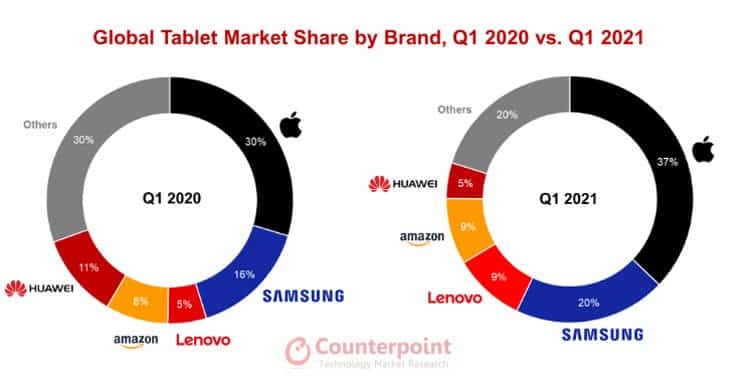 Major tablet makers ramped up production and shipments in 2020 to meet the increased demand. Apple and Samsung aggressively released and promoted new models. The two companies expanded their market shares throughout 2020. The top tablet makers seem to have benefited from less competition in the growing market. Many tablet players had earlier downsized or closed the business, while Huawei sharply lost its share due to the US ban.

Senior Analyst Liz Lee said, “The basic iPad models accounted for 56% of the overall iPad shipments in Q1 2021. The iPad Air and iPad Pro series came next with 19% and 18% shares, respectively. Since consumers are constantly concerned about prices and portability, the latest iPad 8 emerged as the top-selling model. Launched in October 2020, the iPad Air 4 ranked second on the bestseller list as it was a huge hit with consumers looking for cost-effectiveness as well as high specifications.”

Lee added, “The recently launched M1 iPad Pro carries big changes compared to the previous models. The initial consumer response has been highly positive. But Apple is currently grappling with supply chain constraints such as chip shortages and production issues related to the Liquid Retina XDR panel. Accordingly, we expect the M1 iPad Pro shipments to be able to soar in Q3 backed by supply stabilization. This growth will be maintained in Q4, in line with the peak season effect.”

Next The new M1 Apple iMac has defective stands?

iPad production has been cut in half for this reason

WhatsApp for iPad coming in light of multi-device support 2.0