Today, Canalys released a report saying that the latest forecast data shows that the global smartphone market will grow by 12% in 2021. According to the market research firm, the total shipments will hit 1.4 billion units. If this eventually happens, this means that relative to 2020, there is a strong rebound. Last year, smartphone shipments fell by 7% due to the severe restriction of the market as a result of the pandemic. 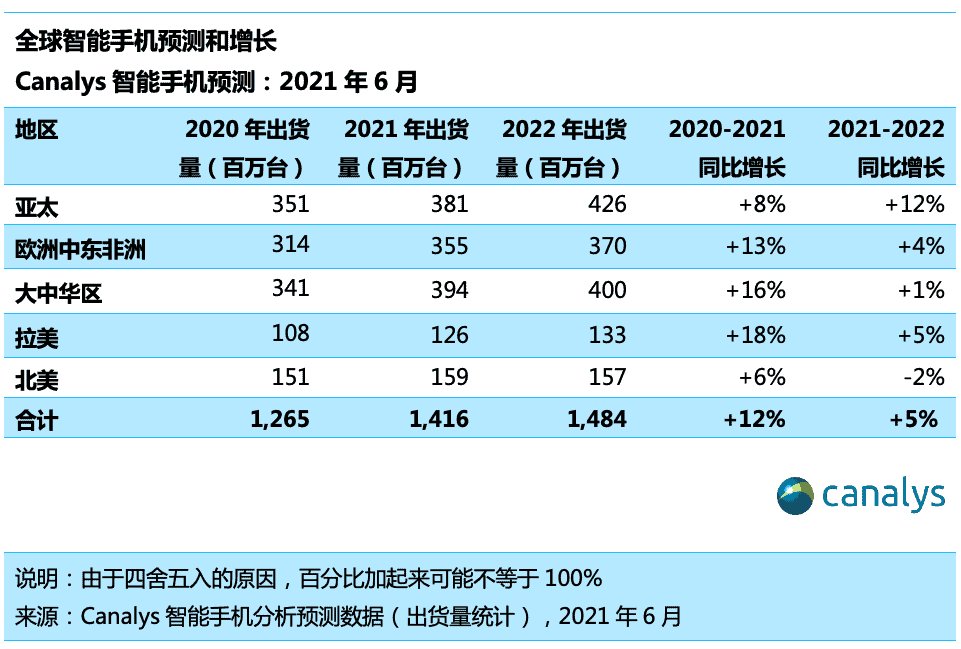 As the coronavirus vaccine continues to spread and the cases continue to drop globally, the supply of parts and components will become a new bottleneck in the smartphone industry.

Canalys said: “In some parts of the world, consumers have been unable to take vacations and go out to spend in recent months. Many people have changed their disposable income to new smartphones. The development of 5G mobile phones is strong, it accounts for 37% of global shipments in the first quarter. It is also expected to account for 43% of shipments (610 million units) throughout the year. This will lead to fierce price competition among manufacturers, and many manufacturers sacrifice other hardware functions, such as screens. They also sacrifice power supply so that 5G can be incorporated into the cheapest mobile phones. By the end of this year, 32% of all 5G smartphone shipments will cost less than $300. Now is the time for mass adoption of 5G phones.”

The global PC market is booming

According to Canalys, the demand for technology is growing rapidly and shipments of desktops, laptops, and workstations are increasing. The shipments of these devices hit 82.7 million units in the first quarter of this year. This is an impressive 55% increase relative to the same period in 2020.

Analysts note that the shown result is the highest in recent years. The last time higher shipments in the first quarter were observed is in 2012. Quarterly shipments of laptops and mobile workstations jumped 79% year on year to 67.8 million units. At the same time, the demand for desktop systems decreased by 5%, amounting to 14.8 million pieces.

“The supply chain issue plaguing the industry is a good problem to have,” said Rushabh Doshi, Canalys Research Director. “As average prices rise due to the scarcity of internal hardware, innovation in design is triggering long-term changes to the way PC vendors approach supply and demand. Chipmakers, too, are now bullish about personal computing, and have increased their planned future investments to capitalize on the long-term opportunity. While the pandemic is not over just yet, there is light at the end of the tunnel. This is also spurring SMB investment in computing, which halted abruptly in 2020.”

Next Microsoft starts rolling out Fluid Office: the biggest Office update in decades