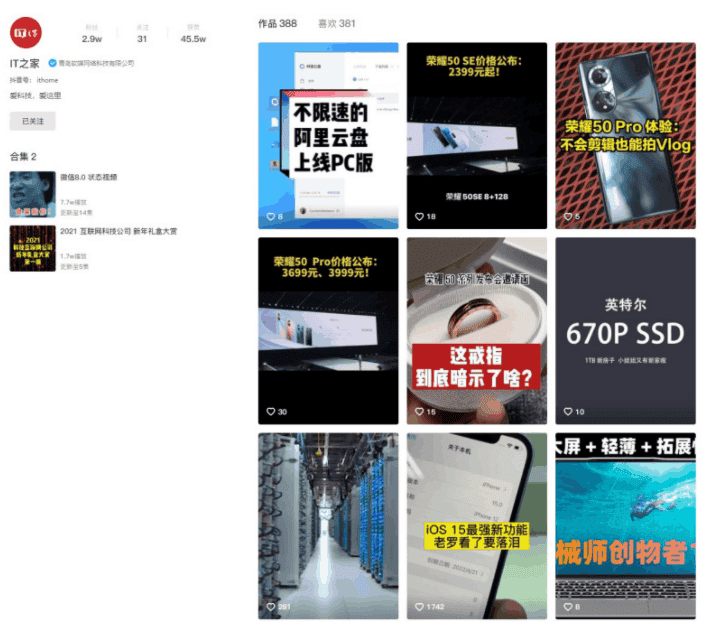 The Douyin web version is relatively simple. The top of the homepage provides a search function to search for videos and users. In addition, it also provides everything, live broadcast, entertainment, knowledge, two-dimensional, games, food, sports, fashion, and music. The tags, below are videos one by one, there are almost no other elements.

On the video playback page, the functions are quite rich. It supports pause, drag and drop the progress bar, double-speed viewing, floating small window, volume adjustment, full-screen viewing and so in. Like we said earlier, this web version also supports viewing comments but it does not support posting comments for now. As of now, we don’t know how the existing comment to be viewed get posted. Also, there is no information on whether the posting comment feature will arrive in the future.

In addition, login supports verification code, scan code login, and does not support password login. After logging in, you can view your own works and favorite videos. The web page also supports publishing videos. The size of the video file does not exceed 4GB, the duration is less than 15 minutes, and the resolution requires 720p (1280 x 720) and above.

TikTok focuses on cracking down on five types of violations such as vulgarity, infringement, and traffic first

TikTok has been under fire especially outside China for not cracking down properly on violators. However, TikTok claims that it has been doing its best, and managing hundreds of millions of users is no easy task. Every month, TikTok removes millions of contents. The company also deactivates millions of accounts to combat irregularities.