The Huawei Nova 8 family of smartphones already includes models such as Nova 8 SE, Nova 8 5G, Nova 8 Pro 5G and Nova 8 Pro 4G. Soon, according to network sources, the Nova 8i will be added to them.

We know that the new product will receive a 6.67-inch Full HD + display with a small hole for the front camera. This bezel-less panel will occupy 94.7% of the front surface area of ​​the case.

It will be based on the Qualcomm Snapdragon 662 processor. The product combines eight Kryo 260 cores with a clock speed of up to 2.0 GHz; an Adreno 610 graphics accelerator and a Snapdragon X11 LTE cellular modem.

There is the presence of a quadruple main chamber, enclosed in a round-shaped area. The configuration includes a 64-megapixel unit with a maximum aperture of f/1.9, an 8-megapixel module with wide-angle optics (120 degrees), a 2-megapixel depth sensor and a 2-megapixel macro module.

Power will be provided by a rechargeable battery with a capacity of 4300 mAh with support for 66-watt fast charging Huawei SuperCharge. It will take only 38 minutes to fully replenish the energy reserve.

The smartphone will run the Android operating system, supplemented by the EMUI 11. In the future, the HarmonyOS platform will be released for the device.

Counterpoint Technology Market Research has analyzed how much the US sanctions have affected the smartphone sales of the Chinese telecommunications giant Huawei.

If we consider the global base of devices in use, then the share of Huawei has also begun to decline. As of March of this year, it was 9.7%. At the same time, all other major market players – Apple, Samsung, Xiaomi, Oppo and Vivo – have increased the number of owners of their devices.

In the face of sanctions and a shortage of electronic components; Huawei has focused on the supply of smartphones in the upper price range. True, there is a drop in sales here too. More than 10 million P Series and Mate Series units were sold in the last quarter of 2020; and about 7 million in the first quarter of this year.

At the same time, as noted, in the total mass of Huawei smartphones in operation, the share of flagship models has not changed compared to last year: it is 36%. 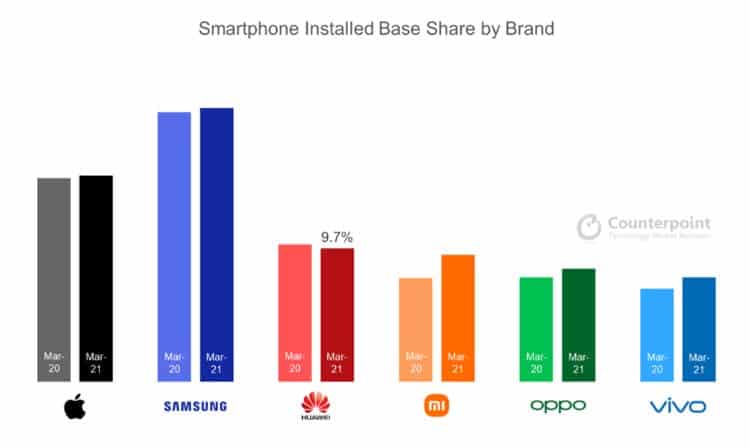 Next Windows 11 supports running Android apps with some limitations