According to ITHome, Apple’s official developer documentation is live with a new App property. This new property gives developers the option to request more memory for iOS 15 apps. As you can see in the image, the key value is com.apple.developer.kernel.increased-memory-limit, a boolean value that allows developers to request more memory for their apps. However, Apple did not officially indicate the exact value of memory that developers can get. This property is available for iOS 15 and above, and according to MacRumors, iPadOS 15 will also get this feature. 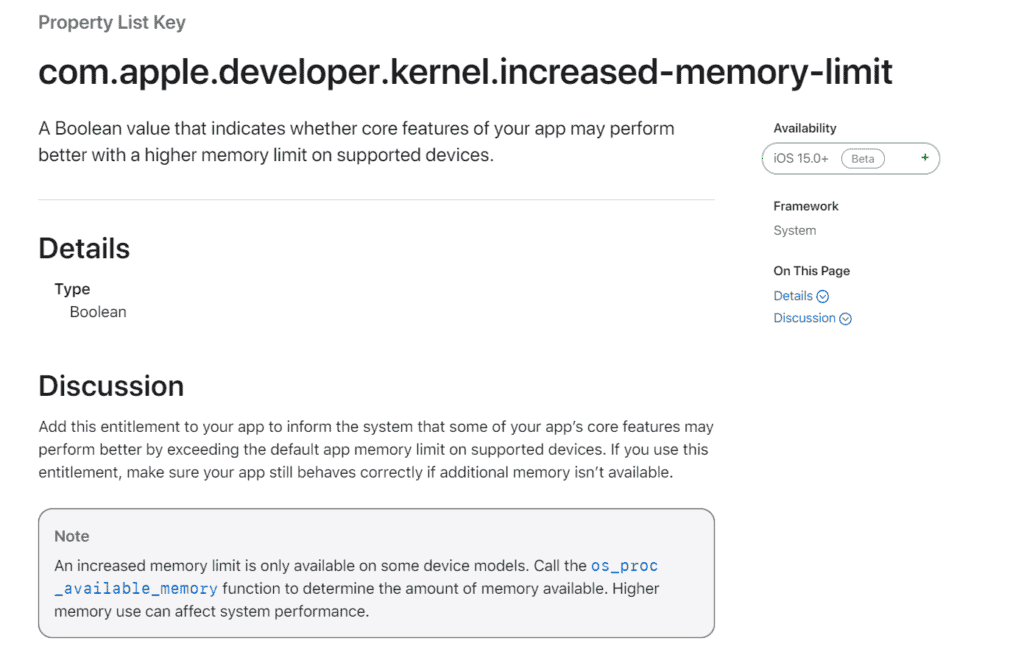 According to reports, the current maximum available memory for a single App is only 5GB. Apple said that applying for more memory only applies to certain device models, and that developers can call the os_proc_available_memory function to determine the amount of available memory, and that using too much memory may affect the system performance.

Apple’s iOS/iPadOS 15 personal hotspot feature now supports WPA3 protocol for better security to prevent password guessing. WPA3 is from Wi-Fi Alliance and it has been around since June 2018. Its main goal is “simplifying Wi-Fi security, enabling stronger authentication, and providing higher encryption strength.

Wi-Fi connectivity on Apple’s iPhone and iPad has long supported WPA3. However, the Personal Hotspot feature has been using WPA2. For the average user, the Personal Hotspot connection experience will remain the same. However, WPA3 has “resilient password-based authentication” that “provides stronger protection against third-party attempts to guess passwords”. This will be relevant for users with simple passwords. The iOS 15/iPadOS 15 is currently in the developer testing phase. According to Apple, the public beta will be available later this summer.

Apple iOS/iPadOS 15 developer Beta 2 is out

Yesterday, Apple launched iOS 15 beta 2 (internal version number 19A5281h) and iPadOS 15 beta 2 to developers. This is the first update since WWDC 2021 at the beginning of this month.

The iPadOS 15 beta 2 release notes on Apple’s developer website show that the update does not apply to the Wi-Fi + cellular version (2016) of the 9.7-inch iPad Pro for unknown reasons. Netizens speculate that Apple has found some serious bugs, so the company is temporarily skipping the affected iPad model. Judging from the release notes, Apple has mainly fixed a series of bugs in the beta versions of iOS 15 and iPadOS 15. In addition, when using “Restore Image” to install the iOS 15 beta, the Finder may become unresponsive. (78834202).

Then is only the developer beta, the public beta will be available later this summer.