Lenovo has taken the wraps off its new Android tablets. One of these recently unveiled tablets comes with an HDMI port that was making the rounds online a while ago. The tablet lineup boasts an impressive array of models such as the Lenovo Tab P11 Plus, Yoga Tab 11, and the Yoga Tab 13.

Aside from unveiling a myriad of new tablets, the Chinese tech behemoth updated its lineup of more affordable tablets. As if that weren’t enough, the company also launched a new Lenovo Smart Clock 2 that comes with a wireless charging station.

The new Android tablets from Lenovo are teeming with impressive features. For instance, the Lenovo Yoga Tab 13 boasts a micro HDMI port, which has been placed on the right side of the device. Moreover, it is powered by a Qualcomm Snapdragon 870 chipset, paired with 8GB of RAM.

The Lenovo Yoga Tab 13 offers 256GB native storage so that you can save your favorite photos, videos, and other multimedia content without worrying about running out of storage capacity. Furthermore, the device draws its juices from a robust 10,000 mAh battery. Thanks to the massive battery, the Lenovo Yoga Tab 13 can also be used as an external display. 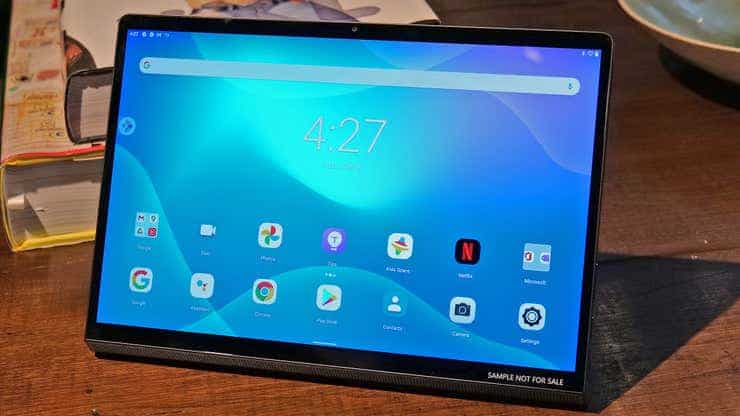 It sports a 13-inch display that offers a high screen resolution of 2160 x 1350 pixels and 400 nits of maximum brightness. While the headphone jack has been eliminated, the device has a USB-C port that can be used for plugging in adapters. Upfront, there’s an 8MP camera for video calling.

The Yoga Tab 11 can be touted as the smaller sibling of Yoga Tab 13. It has a relatively smaller 11-inch display that offers 2000 x 1200 pixels resolution. Furthermore, it packs a MediaTek Helio G90T processor with 8GB of RAM and ships with 256GB of internal storage capacity.

Alternatively, you can go for an 8GB RAM+128GB ROM variant. The Yoga Tab 11 is backed by a 7700mAh battery, and it houses two 8MP rear-mounted and front-facing cameras. Lenovo’s new tablets run Android 11 OS, and their backs feature soft fabric trim for a comfortable grip. 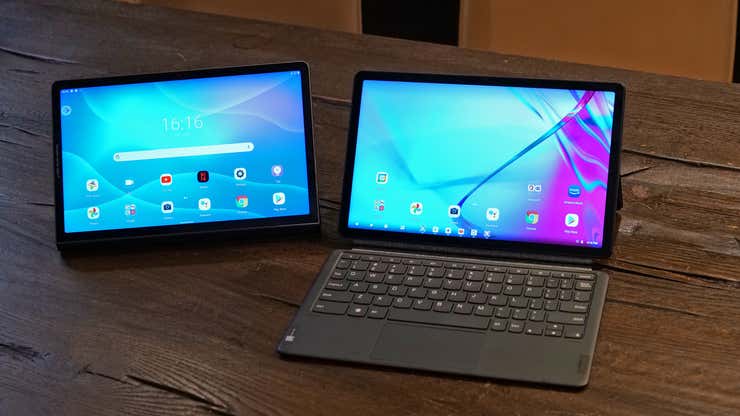 Moreover, there’s a pop-out aluminum kickstand that comes in handy to position the device in different ways. It can be popped out, extended, and even used to hang the tablets using a hook. However, the Lenovo Tab P11 Plus doesn’t include the built-in kickstand accessory.

The Lenovo Tab P11 Plus sports an 11-inch IPS LCD display that offers an impressive 2K screen resolution. It is powered by the MediaTek Helio G90T Tab processor and backed by a 7700mAh battery. It ships with a keyboard and a stylus.

The device is available in two configurations including the 4GB RAM / 6GB RAM and 128GB storage. Lenovo’s entry-level tablets are set to be upgraded, with Lenovo Tab M7 and Tab M8 entering their third generations. The aforesaid tablets are designed to deliver low-end performance.

The Tab M7 packs a MediaTek MT8166, along with 2GB RAM. The Tab M8, on the other hand, runs a Media Tek Helio P22T and features up to 3GB of RAM. It supports an optional charging dock, which enables you to use it as a Google Assistant-led smart display.

Lenovo’s new tablets run Google’s Entertainment Space, which is a launcher that bears a striking resemblance to the Google TV interface. It offers quick access to content such as books, games, shows, and movies in the Play Store. Few manufacturers including Lenovo were expected to use the content-first layout.