Samsung has changed its business with the release of the Galaxy A and M-series. These two lineups introduced good and affordable smartphones with some appealing features like multiple cameras, powerful chipsets, AMOLED displays, and huge batteries. This year, the company is giving a step further by bringing 5G connectivity to these lineups. The brand already introduced Galaxy A22, A52, A72, Galaxy M32, and M42 in 5G flavors and is gearing up to add another device to this growing portfolio of 5G mid-rangers. The new device is believed to carry Galaxy M52 5G moniker and has appeared with the SM-M526BR model number on the Geekbench database. 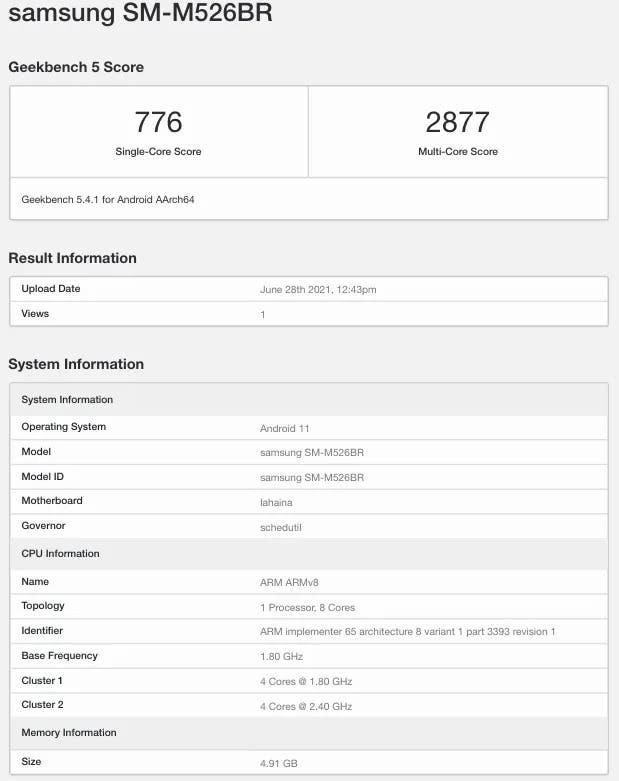 The SM-526BR smartphone is believed to be the Galaxy M52 5G and appeared on the Geekbench benchmarking platform. The listing reveals a score of 778 points in the single-core department and 2,877 points in the multicore range. The benchmark listing further reveals that the upcoming Galaxy M52 5G will sport an octa-core processor with a 1.80 GHz clock speed. The device bears the codename “Lahaina” and packs an Adreno 642L GPU. Upon further inspection, this chipset seems to be the Qualcomm Snapdragon 778G SoC. After all, until now, the Snapdragon 778G is the only chipset to feature the Adreno 642L GPU. This chip is a successor for the Qualcomm Snapdragon 765G and is built on a more efficient 6nm fabrication. It was announced just last month. The device will come with 6 GB of RAM and will run Android 11 based One UI.

Interestingly, with this Snapdragon 778G the Galaxy M52 5G will be placed beyond the A52 that comes with a weaker Snapdragon 750G. The device will offer more performance. Now the question is if it will also impress in other specifications. Hopefully, Samsung will pair this package of specs with an AMOLED display and a huge battery with fast-charging support.

According to reports, the Galaxy M52 5G can end as a rebranded Galaxy F52 5G. This device was introduced last month in China. However, Samsung seems to be improving the processor in the new variant. Unfortunately, not much is known about this handset at this moment. Hopefully, more details will appear in the coming days as the device will start to pass through certain certification processes before its release. One thing we know, it’s coming to join the crescent portfolio of Samsung smartphones offering 5G for a smaller cost.

Next iPhone 13 Pro to feature new ultrawide lens with autofocus