Vivo is gearing up to introduce its Vivo Y72 5G smartphone in India. This will be yet another Vivo Y-series smartphone to reach the Indian market. A new leak suggests that the exact launch date of the smartphone and its memory configuration. There are also some details about the special bank offers that will be available in the country.

According to a leak from 91Mobiles report, the leak of the launch date for the Vivo Y72 5G arrives from an official from the Chinese technology firm. Furthermore, Tipster Yogesh also revealed an image poster of the upcoming smartphone. For those unaware, the Vivo Y72 5G already appeared in Thailand with a MediaTek Dimensity 700 chip, a 64MP triple-camera module, and a 5,000mAh battery. Now, the image poster has revealed additional information regarding the device.

The new smartphone flaunts a 6.58-inch IPS LCD with a Full HD+ resolution with 2,408 x 1,080 pixels, 90 Hz refresh rate, and a 401-pixel density. The device carries underhood a MediaTek Dimensity 700 SoC with 5G integrated modem and 7 nm architecture. This chip has an Octa-Core CPU with two ARM Cortex-A76 cores clocked at up to 2.2 GHz and six power-efficient ARM Cortex-A55 cores with 2.0 GHz clock speed. It also carries a Mali-G57 CPU with two cores. The device is paired with 8 GB of RAM and 128 GB of Internal Storage. You can also expand this storage amount via a microSD card slot. 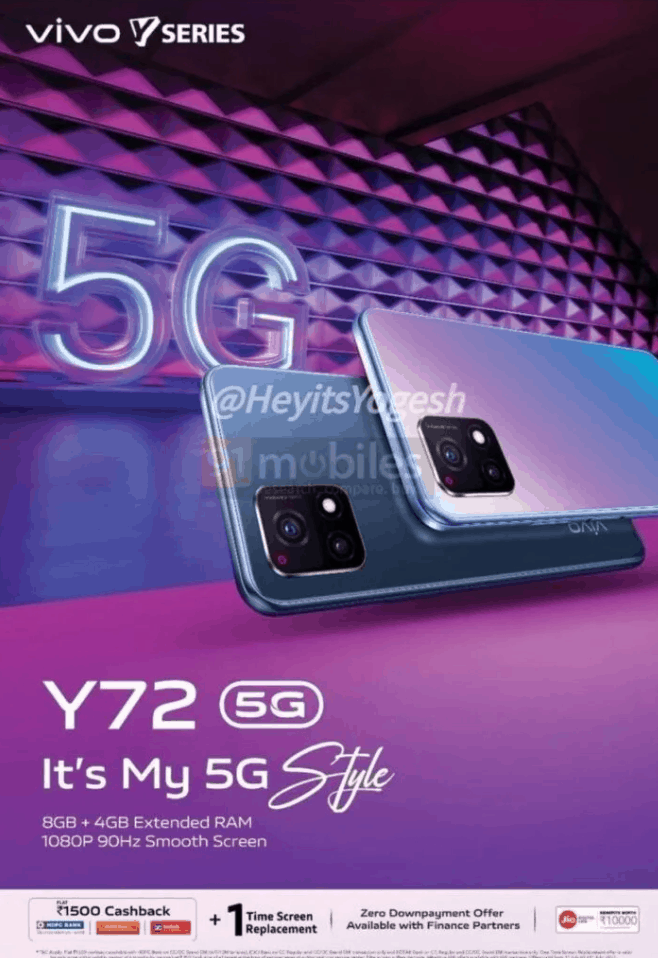 The device draws power from a huge 5,000mAh battery with 18W charging via the USB Type-C port. Other features include Bluetooth 5.1, Dual-Band Wi-Fi, a 3.5mm headphone jack, and a side-mounted fingerprint scanner. The device runs with Android 11 OS with Funtouch OS running on top. The Vivo Y72 5G comes in Graphite Black and Dream Glow colorways.

The company will bring special ban offers as well for Indian customers. Customers will have a 1,500 INR cashback through HDFC bank, ICICI Bank, and Kotak. The company is also offering a free one-time replacement and Jio benefits worth 10,000 INR on the purchase of the new smartphone. At the moment, the device will cost under INR 20,000 which is just around $270. The new handset will go official on July 15.