A new report from the Zhuanzhuan Group shows that Apple is the leader in the used smartphone market in China. It is the iPhone that is most actively purchased in the Middle Kingdom, and the company controls 36.53% of the secondary market for mobile devices.

In second place was Xiaomi with a share of 13.88% and closes the top three Vivo with 12.7%. Users are also buying used smartphones under the brands Huawei, Oppo and Honor. The sales of used Honor devices grew especially rapidly – an increase of 88.34% in the second quarter of this year. In general, the market of used smartphones grew by 10.76% compared to the first quarter of this year. They were especially eager to buy devices with support for fifth-generation networks. 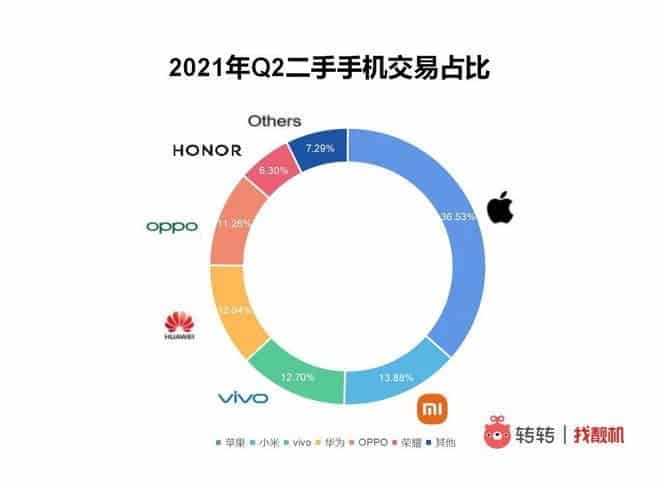 Analysts point out that prices for used iPhones have been steadily declining. But in the case of Huawei, the situation is the opposite – they are being resold more and more expensively. So, the price of the supported Huawei Mate 40 Pro has grown by 96.45% and it turns out that this model should lose the least in price. The increase in cost is due to the fact that Huawei devices are now in short supply and they are becoming a rarity. 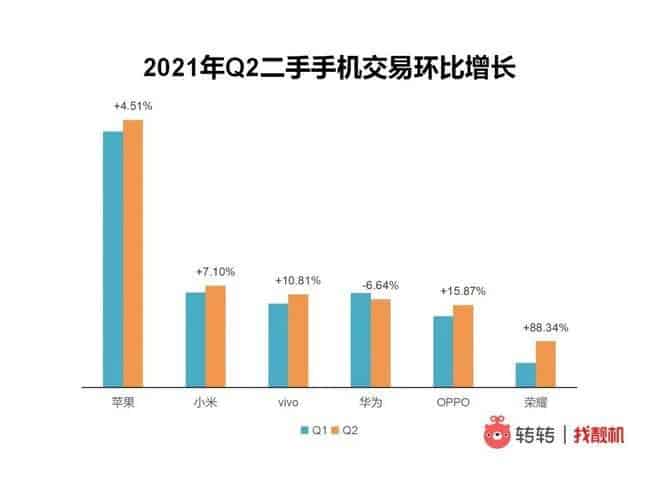 Foxconn, a contract assembler of a variety of equipment, including iPhones and other Apple devices, reported 20 percent revenue growth in the second quarter of 2021. Bloomberg writes about it. One of the probable reasons was the high demand for Microsoft and Sony game consoles, as well as Apple products.

According to the report, the company’s revenue has grown over the past three months to 1.38 trillion Taiwan dollars (about $ 48.7 billion). This indicates that the demand for iPhones, game consoles, servers and other electronics remains consistently high. Presumably, it persists thanks to the pandemic and the transition to remote operation. People at home need to have virtual entertainment, and companies, in turn, need to maintain data center infrastructure.

We add that Foxconn is planning to start the production of electric vehicles. At the end of June, Foxconn announced its intention to help Taiwanese company Gogoro with the distribution of electric scooters. The peculiarity of this transportation is the ability to quickly replace the battery. We do not know what Foxconn exactly will assemble or produce. Foxconn is also developing its own platform for electric vehicles, on the basis of which it will be able to assemble custom solutions for third-party companies.

Previous How to remove Apple ID from iPhone without password