Over the last few months, there have been multiple reports regarding Xiaomi’s MIUI system. Most of the complaints revolve around the display, camera, and battery. However, there are other software issues with this system. One of the problems is the MIUI dark mode issue. According to Zhang Guoquan, director of Xiaomi’s system software department, the MIUI dark mode issue will be gone soon. He claims that the feature is in revision and it will work better for users. 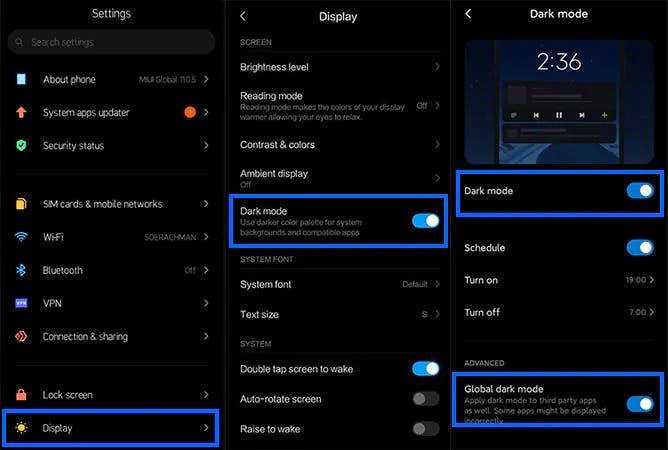 A user on Weibo wrote, “I hope MIUI dark mode will be optimized, it is really not easy to use now”. In response, Zhang Guoquan said that special optimization will be carried out. He also claims that the system will solve the mandatory dark mode of some compatible apps.

Due to the numerous complaints regarding the MIUI system, Xiaomi had to set up the MIUI Pioneer group. This group focuses on solving various problems with MIUI that users report. The MIUI Pioneer Team consists of five people, and Zhang Guoquan is responsible for mobile phone system software development. He will also solve hardware optimization issues, operating system issues, and network issues.

Jin Fan, the general manager of MIUI, claims that the next work progress will public in the Xiaomi community in the form of a report. Before now, Xiaomi separates fans and ordinary users by relying on the game mode. However, with the increase in sales, more users joined the Xiaomi family. The company will now have to adjust two sets of parameters that it did not list.

The issue with MIUI Dark Mode is that it forces this mode even for apps that do not support dark mode. While this may be cool for some users, it causes glitches for many users. Also, once you activate MIUI Dark Mode, you cant switch to the light mode for select apps. This complaint is not wide spread but it occurs.  An MIUI user took to Reddit to say

“Recently I just installed the MIUI 12 update and every time I put my phone in a dark mode other apps I have in dark mode start glitching and either put the icons in light mode or put other things like reactions in a super weird horrible dark mode and I can’t see anything. The solution I have found it’s to put my phone in light mode, that way dark mode apps work fine. But the problem it’s that I don’t use light mode. Anyone has a solution for this issue?”