With the arrival of 5G networks, smartphones are quickly concentrating their efforts on bringing more smartphones with support for it. However, there are still dozen of countries where 5G isn’t a reality. India currently stands as one of the most important smartphone markets in the world. However, its first 5G network is still in the testing phase. Despite the lack of a 5G network for 5G smartphones to navigate, smartphone makers can hold technology anymore and are bringing a plethora of 5G smartphones to the country. According to estimates, by 2023 more than half of the smartphones in the market will have 5G connectivity. Realme is pretty aware of the increasing competition in the 5G segment and is committed to bringing cheap 5G alternatives for its loyal fans in India.

According to Realme, the upgrade cycle is around 2 years, buying a 5G smartphone now means that you’ll get to use it on a 5G network before you move on to the next model. Another report from Ericsson states that 26% of mobile subscribers in the country will use a 5G network by the end of 2026. Based on this, Realme wants to make 5G smartphones more affordable. Earlier this year, the company said that all of its phones costing $270 and above will offer support for the fifth-gen networks. Now, the company is revising this figure down to INR 15,000 or $200. That means that more affordable smartphones will emerge by the end of the year. 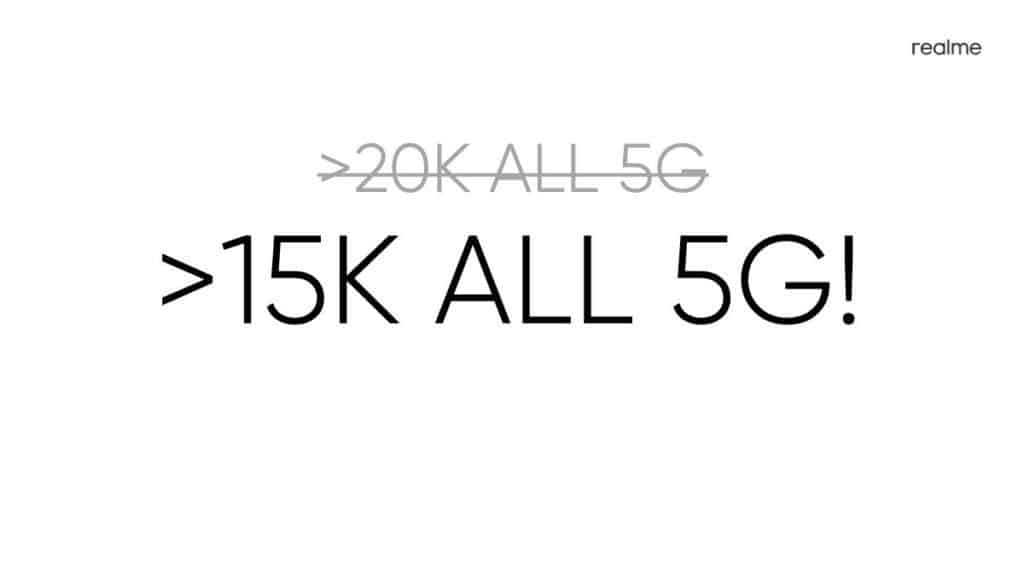 The company gave the first step with the release of the Realme Narzo 30 5G in India with an INR 16,000 price tag. Of course, the company says that it is working on developing 5G smartphones costing less than INR 10,000 or $135. This is achievable thanks to the rise of the new affordable chips offering 5G connectivity. In special, we have to mention MediaTek which Dimensity 700 5G chip. This affordable SoC is allowing many smartphone OEMs to bring affordable 5G smartphones. Qualcomm has the Snapdragon 480 5G, but apparently, it does not seem to be favored over Dimensity 700 by most OEMs.

Aside from the upcoming 5G smartphones in the mid-range and low-end category, the company will also bring more flagships. In fact, more devices will arrive under the GT lineup. The Realme GT 5G with Snapdragon 888 will reach India before Diwali. Meanwhile, the country already has the Realme X7 Max 5G which is a rebadged Realme GT Neo. The company is also preparing a GT Master Edition with Snapdragon 870 that can appear with another name in India.

This can make Realme even more popular in India. According to Counterpoint research, the Chinese brand is the no.1 5G smartphone brand in India. It currently has a 28% slice of the market. The arrival of more smartphones with 5G will further solidify the company’s top spot in the segment.