With the addition of a large number of features, the MIUI system that was once known for its excellent experience and smoothness has now become the biggest burden of Xiaomi’s flagship. The system is too bloated and the probability of bugs appearing is very high. There have been multiple complaints in almost all aspects of the system. Therefore, the Xiaomi MIUI team recently established a Pioneer Team to address the user feedback of MIUI 12.5. According to the latest reports, Xiaomi will unveil the next-generation MIUI 13 system as soon as July 16th. 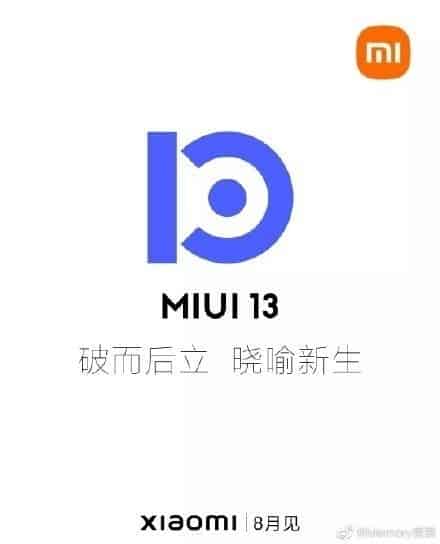 However, there are also reports that the MIUI 13 will arrive officially in August. The August launch for MIUI 13 implies that this system will launch with the Xiaomi Mi MIX 4. However, the July 16th launch seems to be too early for the Mi MIX 4. So which will it be? July 16th or August launch? Most likely, the company will only announce the official launch date of MIUI 13 on July 16th. It is most unlikely that Xiaomi will release the MIUI 13 on July 16th.

According to reports, the MIUI 13 will have to streamline its design. The system will not work properly with the bloatware of the MIUI 12. MIUI 13 will also provide function plug-ins and will retain only the default streamline functions. Users can choose the function modules they need for installation.  This will effectively improve the current state of MIUI 12.5 and reduce the problems. Furthermore, there are also reports that the MIUI 13 is in testing. This system will also come with RAM expansion technology. This feature will improve the fluency of smartphones with small memory capacity.

In addition, the distributed menu is also a highlight of MIUI 13. Most notably, according to previous rumors, the Mi MIX 4 flagship will be pre-installed with MIUI 13 system for the first time. This flagship is Xiaomi’s first mass-produced under-screen proactive model, which represents Xiaomi’s commitment to mobile phone screens. There are also reports that the MIX 4 will arrive with the Pad 5. This further rules out the possibility of a July launch.

The MIUI 13 does not only come with new features, it also adds new design, fonts, and spacing. Furthermore, this system comes with the new MIUI Logo as well as new Xiaomi standards.

Devices to get MIUI 13

Furthermore, it may interest some users that the pretty old Xiaomi Mi 6 will still get this update. The Xiaomi Mi 6 is now a “golden boy” for Xiaomi. According to Lei Jun, after four years, the Xiaomi Mi 6 still has over 2 million users. This is quite impressive from Xiaomi’s perspective.

Next Samsung issues a strong warning to leakers