The Chinese smartphone market now has a new look with the “technical knockout” of Huawei. According to the recent rankings by Master Lu, Vivo, Redmi, and Oppo are the new “kings” of the Chinese smartphone market. Collectively, these three brands account for over 50% of the Chinese smartphone market. The market shares of Vivo, Redmi and Oppo are 19.76%, 18.74%, and 14.55% respectively. Master Lu said that Vivo is the highest brand in the Android market in the first half of the year. Vivo’s rapid growth has relations to its wide coverage. From low-end to mid-and high-end. the company has comprehensive coverage. Vivo has achieved a one-to-one correspondence with purchase needs. 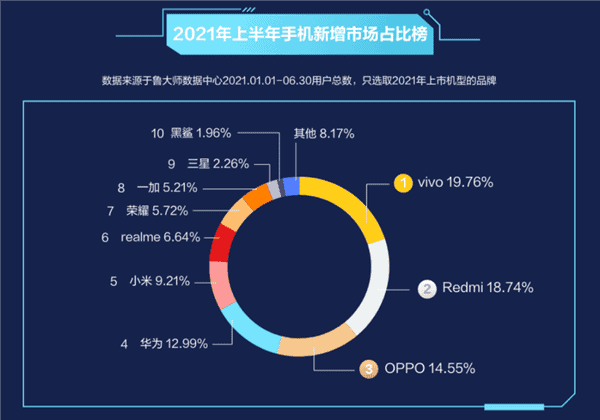 In the second and third places, we have Redmi and Oppo. Redmi is backed by Xiaomi and has a tradition of price wars. After its independence, it has a wealth of models and undertakes the task of volume, allowing Xiaomi to steadily hit the high-end market.

Constrained by the cut-off of chip supply, Huawei’s smartphone market share continues to decline. As for Honor, after its independence from Huawei, its market share dropped. At the time of the 2020 annual report, Honor was still TOP4. It has now fallen to seventh place and is overtaken by Redmi, which is now gaining momentum.

After independence, there were not many new smartphones and the price is slightly higher. This is affecting Honor’s performance. However, the Honor 50 series is doing pretty well and might just change the company’s fortunes.

According to Strategy Analytics, Samsung is becoming the largest supplier of mobile devices in the world. The report shows that the quarterly performance of the South Korean giant hit 77 million smartphones shipments. This means that it controls almost a quarter of the market – 23% and growth in annual terms was 32%. Despite successful sales of the iPhone 12, which saw Apple beat everyone else in the fourth quarter of last year; the first quarter of this year was not as successful for the Cupertino-based group. It is in second place with a market share of 17% and 57 million delivered smartphones. Closing the top three is Xiaomi, which has managed to increase the supply of its devices by 80% year on year. Its market share is at about 15% and in quantitative terms, it is 49 million devices.

In the fourth and fifth positions, we have two Chinese manufacturers, Oppo and Vivo. These companies shipped 38 million and 37 million smartphones respectively and this allowed them to take 11% of the market share.

Next Redmi K50 series with a Snapdragon 895 chip to launch this year?