On July 20, Oppo announced the much-awaited Oppo Watch 2 series and a recently unveiled launch poster has confirmed its launch date. The Chinese tech company will be unveiling the Oppo Watch successor during a product launch event that will take place on July 27. The wearable was first teased in China at the Reno6 launch event in May.

The Oppo Watch 2 was subject to a slew of speculations at the time. It made multiple appearances on Weibo in the form of leaks. The company has put all these speculations to rest by releasing a poster that confirms the upcoming wearable’s release date. Earlier reports have already leaked a few other key details about the device.

The Oppo Watch 2 series will make its debut in China on July 27 at 3 PM (local time). Regrettably, the launch poster does not divulge details about the Watch 2’s specifications and features. Back in May, XDA Developers had revealed that the Watch 2 46mm edition has been assigned model numbers like OW20W3 and OW20W1.

Furthermore, the publication suggested that the 46mm model will go up for sale in Steel Blue, Mine Shaft, and Dust Gray color options. The site went on to reveal that the the slightly smaller 42mm version carries model number OP20W2. This model will be available in Matisse, Water Leaf, Gold Sand, and Mine Shaft color options. 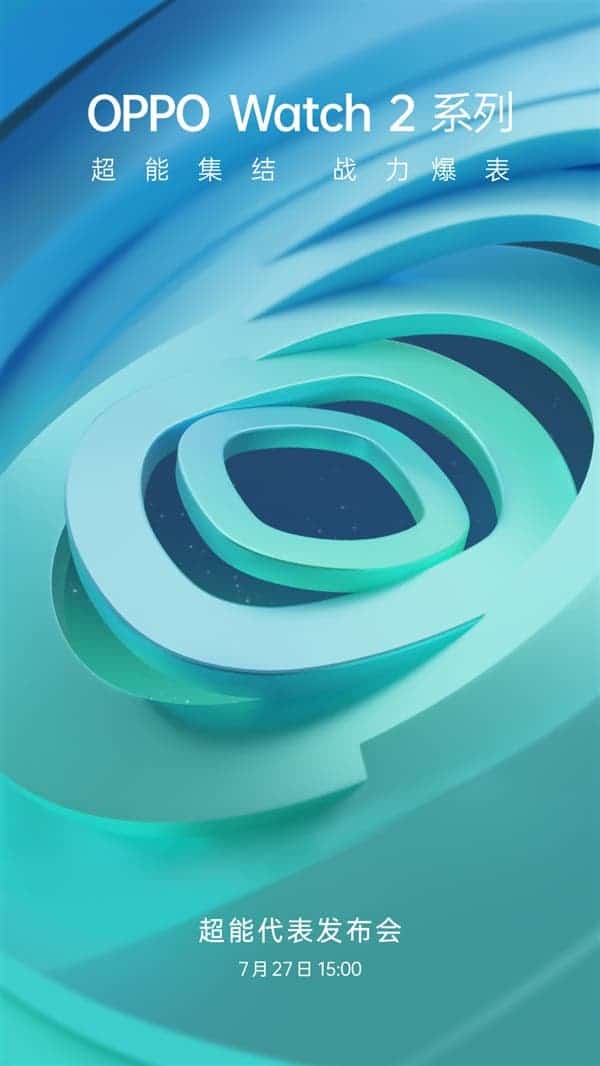 Oppo has suggested that the Watch 2 series will be better than other Android watches available in the market when it hits the store shelves. The company believes that its upcoming wearable lineup will outperform other powerful watches in the Android segment. It will be an impressive achievement considering that Oppo made its foray into the smartwatch segment in March 2020, and has already launched a slew of new products.

Tipster mlgmxyysd has already revealed some key information pertaining to Watch 2. Oppo is likely to unveil about 7 models including the aforesaid OW20W3 and OW20W1 models. Aside from that, the wearable will reportedly pack Snapdragon Wear 4100 wearable platform from Qualcomm, considering that the build property file features the SoC as “msm8937_32go,” which is also listed in the firmware for TicWatch Pro 3.

Furthermore, the tipster suggests that the Watch 2 could run Wear OS. The original Oppo Watch shipped with 8GB of internal storage. However, the Watch 2 is likely to come with 16GB of onboard storage. The build property file has confirmed this piece of information. Aside from that, the tipster divulged more details about some new watch faces. They also hinted at the addition of a new OPPO Relax app, and stress detection.

Next High strength self-healing glass has been created for smartphones