If you remember in 2019, Google Maps introduced an interesting feature dubbed mass transit crowdedness predictions. It provides valuable information about how crowded a bus, train, or tube would be before the commuters got on it. This is quite helpful because it allows them to plan their daily commute accordingly. Initially, this feature went live in 200 cities worldwide. But now, it is expanding to up to 10,000 transit agencies in 100 countries.

“It’s no surprise that transit ridership took a drastic plunge during the early days of the pandemic. While people are returning to public transit — with transit directions on Maps increasing 50% compared to last year in the U.S. — safety remains top of mind. That’s why we’re expanding transit crowdedness predictions to over 10,000 transit agencies in 100 countries so you’ll know if your line is likely to have lots of open seats, hit full capacity, or be anywhere in between. With this information you can decide whether you want to hop on board or wait for another train. Because pandemic or not, no one likes standing in a jam-packed subway car.“

Google’s “mass transit crowdedness predictions” feature works based on historical location data and self-reporting from Maps users. As a result, it generates predictions. But you don’t have to worry about user data leak because everything is done anonymously. 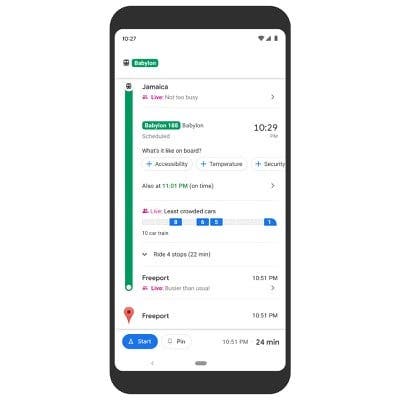 Apart from this, Google is testing a new feature in New York and Sydney to see whether it can accurately collect and display live crowdedness information down to the transit car level. In other words, Google is trying to display the crowdedness of a particular train car instead of the entire train in general. For this, Google works with transit agencies and data they provide. Obviously, after successful testing, this feature will go live in other cities as well.

Plus, Google is going to add several new features to the Maps Timeline on Android. Among them, we can mention a new “Insights” tab, which displays trends about the amount of time you’ve spent and the distance you’ve traveled in different transport methods. And of course, it shows places you’ve been in. Third, the “Trips” tab lists all locations visited. You can even share this list with others.

And for the US restaurants, there is a review option, which also has new prompts to share meal pricing, takeout and delivery availability. Other businesses will get similar options soon.

Next Wireless chargers with Realme MagDart magnets showed in images

Google Maps now tells you how much your trip will cost