Honor Tablet V7 Pro made an appearance in a teaser video revealing the product design, and a slew of other details. A noted Chinese leaker suggested that it will be powered by an unreleased SoC from MediaTek. The Taiwanese chipmaker has responded to the leaked images, describing them as fake.

On July 23, Honor released a video of the Honor Tab V7 Pro, revealing some vital information regarding the upcoming device. In the video, the Honor Tab V7 Pro seems to adopt a right-angle frame design, while sporting a blue plain leather rear panel, along with an oval lens module. Considering its overall outward appearance, it appears that it will be a premium tablet from Honor.

The Honor Magic 3 series.is slated to be unveiled at an August 12 event. Aside from that, Honor Life’s official Weibo account confirmed the arrival of another high-end tablet dubbed, the Tablet V7 Pro at the launch event. Honor even shared a teaser video to showcase the tablet’s design. A leaker attached more hype surrounding the tablet’s launch by revealing details of the chipset that will be powering it.

The teaser video posted to Honor Life’s official Weibo account showed a camera setup similar to that of the Honor 50 lineup. Aside from that, it gave us a glimpse of the SIM card slot, volume rocker, and microphone that are located on the left side of the tablet. The center of the tablet houses the Honor branding. 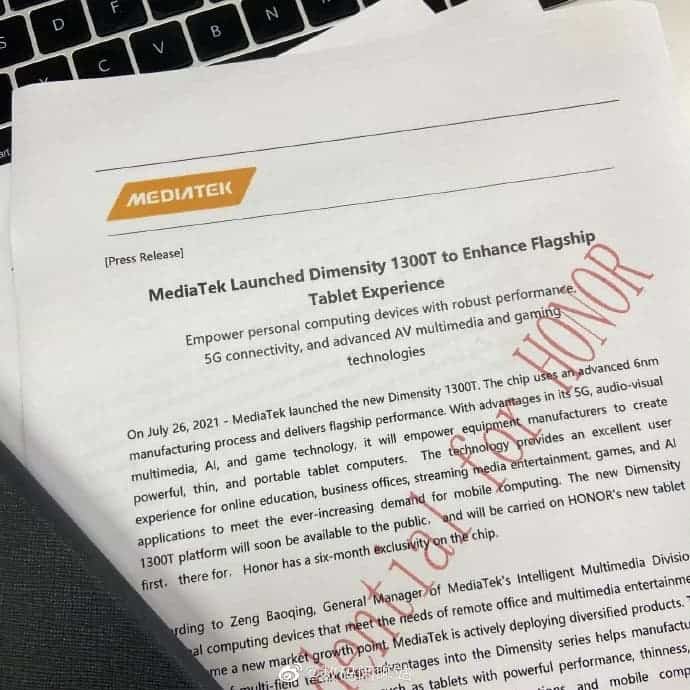 A renowned leaker from China known as Digital Chat Station claimed that the V7 Pro will be the world’s first high-end tablet to pack the MediaTek Dimesnity 1300T SoC. To back up this claim, the tipster posted a photo of what appears to be an official press release from MediaTek for its upcoming chipset. According to the aforesaid printout, the 6nm chip will be announced on July 26. It also suggests that the company will have exclusivity on the new chip for six months.

MediaTek Responds To The Leaked Picture

With reports suggesting that the Honor Tablet V7 Pro will be the first tablet to pack the Dimensity 1300T processor, MediaTek has responded to this speculation. “The pictures are fake news, and the manuscripts are all PS,” the company told Kuai Technology. The company has dismissed this theory as mere speculation. Details about the processor that will power up the tablet are scarce.

Last year, Honor announced the Honor Tablet V6 will have awe-inspiring features and top-notch specs. The V6 garnered huge popularity among consumers. However, Honor did not bring a Pro version of the V6 into the market. Likewise, users who are waiting with bated breath to get their hands on the upgrade will end up disappointed.

As the name, Honor Tablet V7 Pro suggests, will actually be a cross-generation, rather than an iteration. It is also worth noting that the company stressed the word “creation” when it announced the V7 Pro tablet. This implies that the tablet may be optimized for the office segment as far as positioning is concerned.

Next Realme Pad specifications have been leaked