Realme is successful in the smartphone market and increasingly wants to scale its business. It intends to penetrate with its products into various segments and is building its ecosystem. Soon, its lineup of devices will receive a new laptop and a tablet. Today we have a reason to tell more about the Realme Pad.

The specs of the Realme Pad have been leaked, indicating that it will be a slim and stylish tablet encased in an aluminum case. The dimensions of the device will be 246.1×155.8×6.8 mm. It will have 6 GB of RAM and a 64 GB flash drive with the ability to expand it using memory cards. The new product will have a 7100 mAh rechargeable battery.

The Realme Pad should offer a 10.4-inch display and a USB Type-C port. We do not know the type of the matrix, but, most likely, it will be an IPS panel. Judging by the images, the tablet will receive a single rear camera. We can assume that we will see two versions of the Realme Pad: with and without 4G LTE support (only Wi-Fi).

As for the processor, there is no clarity about which chip will be in use. But there is an estimation for the price – $309. When to wait for the announcement of the Realme Pad, we do not know. There is a chance that the company will not be late with the release and will present a new product in the very near future. 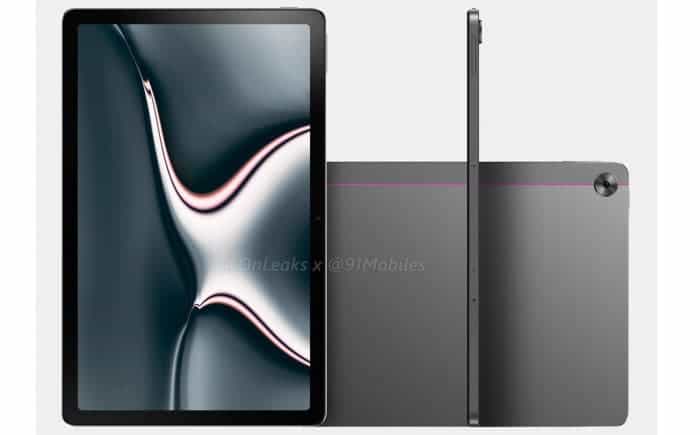 In June, the Chinese company Realme announced the preparation of its first laptop, the Realme Book laptop. Now 91mobiles in partnership with @OnLeaks has published high-quality renders of the device.

The laptop appears in the images in various colors. It is reported that the device will enter the commercial market in four versions – blue (Real Blue), gray (Real Gray), apricot (Real Apricot) and red (Real Red).

It is noted that the laptop will receive a design in the style of the MacBook Air. The laptop is housed in a slim body, and the display is surrounded by narrow bezels.

In one of the side parts you can see two USB Type-C ports, in the other – a USB Type-A connector and a standard 3.5 mm audio jack.

According to rumors, it will be based on an eleventh-generation Intel Core processor. The display will be 14 inches diagonally. The laptop will ship with Windows 10, and will get an upgrade to Windows 11. Moreover, there are speculations that the Realme Book will be one of the first Windows 11 laptops out of the box.

The official presentation of new devices will take place next month. Together with the laptop, the company’s first tablet, the Realme Pad, may be announced.