POCO has recently unveiled the POCO F3 GT on global markets. The device, as expected, is a rebranded version of the Redmi K40 Gaming Enhanced Edition that went on sale in China earlier this year. Now, the company is preparing the terrain for a new “GT” smartphone and it will yet be based on another Chinese phone. The new smartphone will carry POCO X3 GT and will be based on the Redmi Note 10 Pro 5G. This variant is the only version of the Note 10 that isn’t available for global customers. Now, it will come as a POCO smartphone.

POCO has been betting on this rebranding strategy since the last year, with just a few original devices. The POCO X3 and its variations are mostly original smartphones not based on existing Mi or Redmi devices. Now, however, the POCO X3 GT will be the first smartphone under the X3 series to be based on an existing device. While we already know what to expect from the device, POCO is trying to build the hype for those who have completely missed the Redmi Note 10 Pro 5G launch. 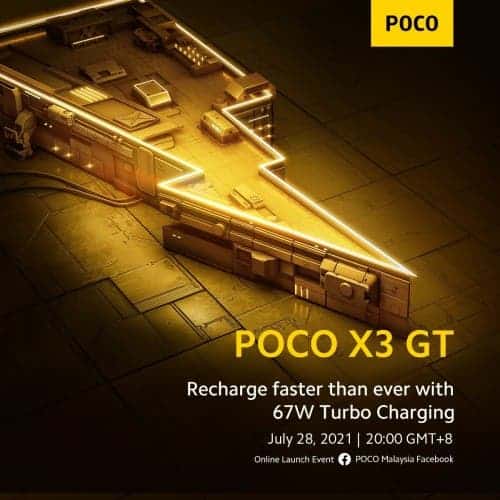 We already know that the smartphone packs the MediaTek Dimensity 1100 chipset. Now, POCO has confirmed that it will also come with a 67W Turbo-charging. That’s the same fast-charging speed offered by smartphones on the premium Mi 11 series. Apparently, Xiaomi woke up after seeing many Realme mid-range smartphones coming with 65W fast charging. Meanwhile, we have some companies launching flagship devices with just 15W fast-charging (I’m looking at you Samsung), but that is another story. Another point for POCo is the fact that charging brick will come bundled with the device.

The POCO X3 GT will arrive on July 28. We expect the company to keep confirming a few details ahead of the launch. However, we already know what to expect. We can’t many differences outside of a possible change in the design.

The POCO X3 GT flaunts a 6.6-inch Full HD+ LCD display. It comes with Full HD+ resolution and a 120 Hz refresh rate. The device has a centered punch-hole that serves as a home for the 16MP selfie snapper. Moving around to the back, we have a rectangular island comprising three sensors. There is a main 64 MP camera, an 8 MP ultrawide module, and a 2MP macro sensor.

Next POCO X2 is receiving MIUI 12.5 update in India