Micromax E7446 is expected to launch along with the Micromax IN 2b. which the company claims will offer a long battery life. The company announced its IN series of phones earlier this year and launched the IN 1 in March. Now, the Micromax E7746 has been spotted on GeekBench benchmarking platform.

While the launch event is just around the corner, a new smartphone bearing codename E7446 has surfaced on the benchmarking platform. If the model number is anything to go by, this could be the Micromax IN 2 or the IN Note 2. Considering the model numbers of previously launched Micromax smartphones, 91mobiles suggests that the E7446 could be launched as the IN 2 or the IN Note 2.

The Geekbench listing has revealed a myriad of details about the Micromax E7446 specifications. For instance, it implies that the phone will be powered by the MT6785 chipset. In other words, it will pack the MediaTek Helio G90 SoC under the hood. Aside from that, it will ship with 4GB of RAM and run the latest Android 11 OS. 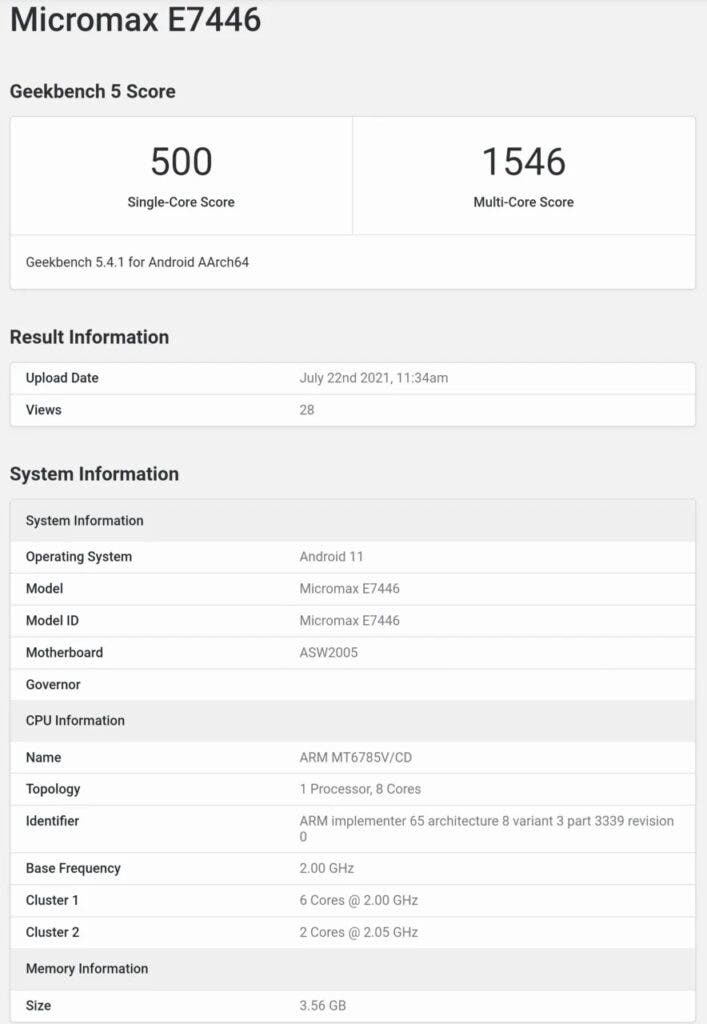 The phone achieved 500 points in the single-core test on Geekbench 5.4.1., and 1,546 points on the multi-core test. Taking the RAM capacity, as well as the processor into consideration, the Micromax E7446 appears to be either a lower mid-range or an entry-level smartphone.

A previously surfaced leak suggests that the Micromax IN 2 will feature the Unisoc T610 SoC. This again, implies that the phone that has appeared on Geekbench is the IN Note 2. The IN 2 will reportedly sport a 6.5-inch LCD display with HD+ resolution, and a waterdrop notch. It is likely to house a 13MP main camera and a 2MP secondary camera at the back. There will be an 8MP front shooter for selfies.

Moreover, the device will probably draw its juices from a 5,000mAh battery that supports 10W charging. The Micromax IN 1B had a starting price of INR 6,999 (about $94). Its successor is likely to carry a similar price tag in the Indian market when it hits the store shelves.

Next OnePlus Nord 2 Goes Up For Sale In India Via Amazon, OnePlus India