A couple of months ago, Samsung introduced the Galaxy A52 and Galaxy A52 5G. The smartphone series came to succeed in 2020’s best-selling Samsung Galaxy A51. Unfortunately, the 5G variant is not widely available as the company is taking a “per-market” route to deploy its 5G variants. We don’t even know if the A52 5G will ever reach some markets like India, after all, reports indicate that Samsung is already testing the Samsung Galaxy A52s. It’s common to see Samsung launching these “s” incremental upgrades of some of its smartphones. Since the A50 series is one of the company’s most successful, the Galaxy A52s is not coming as a big surprise.

Apparently, the Galaxy A52s will be much better than its predecessor and the performance jump has the potential to basically discontinue the A51 5G. Today, the device has passed through the GeekBench website which confirms it has the powerful Qualcomm Snapdragon 778G SoC inside. The smartphone in question appeared on Geekbench with SM-A528B/DS moniker and also visited the Bureau of Indian Standards (BIS) website recently. 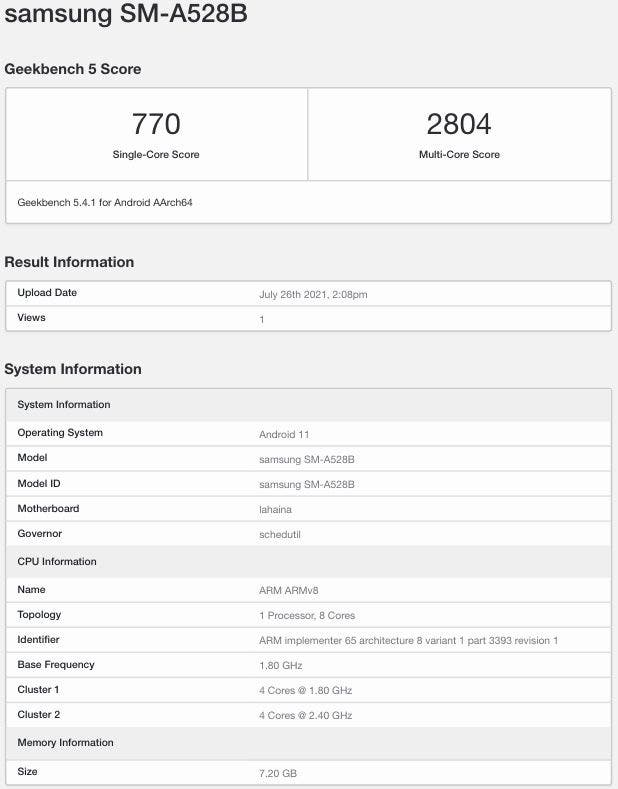 We don’t think there will be a Galaxy A52 4G variant, after all, launching more 4G variants at this point seems pointless. The Galaxy A52s will arrive with 5G straight out of the box thanks to the recently released Qualcomm Snapdragon 778G SoC. This particular chip is paired with the Adreno 642L GPU which offers a great upgrade over the Qualcomm Snapdragon 750G and it’s Adreno 619. The device also has 8 GB of RAM, but we can expect a variant with 6 GB of RAM to appear as well. It runs Android 11 which is hardly a surprise at this point. The device will also have a layer of One UI 3.0 on top of Android. The handset scored 770 and 2,804 in Geekbench’s single-core and multi-core tests.

Although details of the device are unknown, we believe it will share some hardware from the Galaxy A52 5G. That probably includes a 6.5-inch Full HD+ AMOLED display with Full HD+ resolution (2,400 x 1,080 pixels). The device may also offer at least 90 Hz of refresh rate. The A52 5G draws its powers from a 4,500mAh battery with 25W fast-charging support.

Samsung will likely start a promo campaign for the new device. After all, the A52s certainly will get some attention from the company in terms of marketing. For now, it’s impossible to determine when the device will arrive. After all, the Galaxy A52 5G leaks started to pop out several months before its actual release.