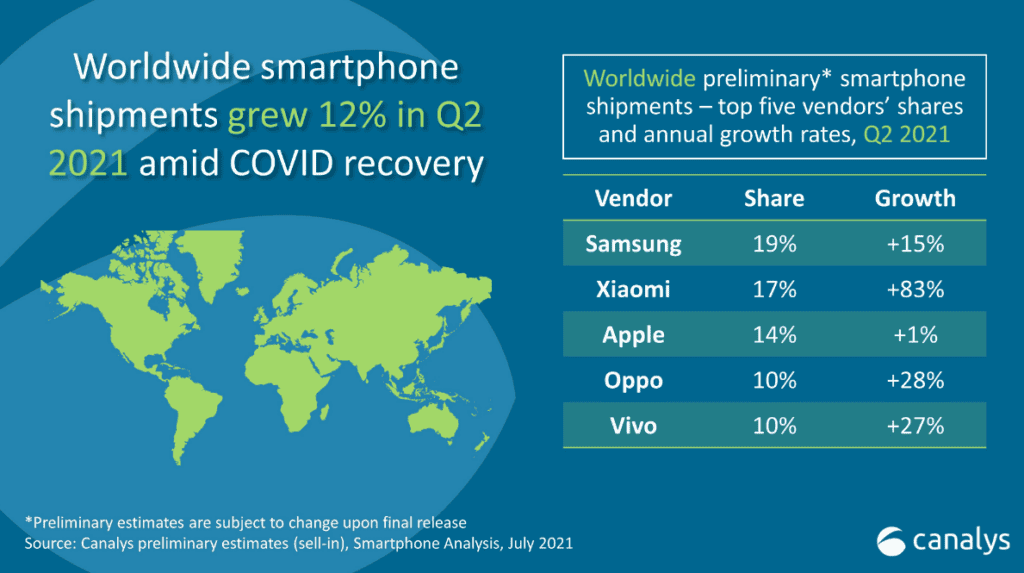 The top 5 smartphone manufacturers in the world collectively account for 70% of the global smartphone shipments. Samsung, Xiaomi, and Apple hold 19%, 17%, and 14% market share respectively. Fourth and fifth place Oppo and Vivo have 10% market share each.

In this report, Xiaomi is undoubtedly the most dazzling player. This is a fantastic achievement and the biggest milestone in the history of Xiaomi’s development. In fact, while Xiaomi is advancing all the way, several big players including Apple and Samsung are also painstakingly deploying, planning, and competing in the fiercely competitive battlefield of smartphones.

Taking a close look at the top 5 smartphone manufacturers, we can see the latest trend in the global smartphone market.

A. Most of the growth of Xiaomi itself comes from some emerging markets, such as Latin America, the Middle East, and Africa. The company is also improving its performance in some mature markets.

B. After the outbreak of the pandemic last year, most foreign markets were affected in Q2, while the Chinese market was affected in Q1. This is one of the reasons why Xiaomi achieved 83% year-on-year growth in Q2 this year. The other is that the demand for smartphones and smart devices in emerging markets has increased significantly after the pandemic. Xiaomi’s rapid advancement in these markets has captured the strong demand for cost-effective phones in these markets.

C. From the perspective of supply, in many regions, such as Latin America, Middle East, Africa, and even South Asia, many brands are experiencing tight supply, and there are not many manufacturers that can carry out large-scale distribution. This constitutes an excellent growth opportunity for Xiaomi.

China is actually the world’s largest high-end market. China’s high-end market is even larger than that of the United States. Therefore, compared to the Chinese market, most of the other markets globally are lower-end in terms of retail prices.

China itself is already a very mature market. The ASP (Average Selling Price) as of last quarter exceeds $400. The only markets with a similar ASP are Western Europe and the U.S. Only the U.S. has a higher selling price than China. So compared to other markets, China is actually a high-end market, and most of the world is actually a lower-end market. Of course, Xiaomi’s mobile phone pricing determines its ability to do a good job in the market.

Another factor that shapes the global smartphone market is localization. Consumers want to deal with manufacturers that have a local presence. This is what Samsung is doing quite well. In fact, relative to Samsung, Chinese mobile phone manufacturers are relatively late to enter global markets. Samsung is a very mature player. In every region, whether it is smartphones or other products such as TVs and home appliances, Samsung is localizing.

In addition, Samsung has advantages such as local supply chain, logistics, warehousing, etc., as well as establishing long-term cooperative relationships with local retailers. Samsung is ahead of the competition in this regard.

For Xiaomi, the company needs some refining in its operations. With a certain amount of business income, it can slowly promote, increase the scale, and then make more in-depth strategic planning.

4. Xiaomi’s performance in China, the key to the latest ranking

Due to a large number of new product launches in China and other factors, the first quarter hit a record high. For a mature market like China, this growth is very rare. The type of competition in mature markets is not the same as that of other growing markets. Therefore, in the Chinese market, Xiaomi cannot achieve triple-digit or double-digit growth like in India. However, if it can stabilize the Chinese market share or even some improvements, then it is significant.

At present, one of Xiaomi’s focuses in the Chinese market is the offline layout. Online sales are already saturated and online competition puts a lot of pressure on product prices. Xiaomi does not like its prices to rise thus it is moving offline. Xiaomi is quite good with the online market, thus, it may not be able to find any more growth in this space. The company is now focusing on the offline market.

This new offline target for Xiaomi is improving the company’s performance in China. In the long run, this is a good trend, because after all, we are all looking at long-term results. From the perspective of shipments and market share in the last three quarters, Xiaomi has been steadily increasing.

5. Xiaomi Vs Samsung Vs Apple – Who takes the crown?

Samsung, Xiaomi, and Apple are currently the top three manufacturers in the global market. Each of these manufacturers is very different from each other, and each has its own advantages. With Apple falling to the third position, we now have Samsung and Apple competing for the crown

Samsung, first of all, is an old player. It is much larger than Xiaomi in terms of products and supply chain vertical integration capabilities. Even Huawei at its peak cannot follow up in a short period of time. Especially in terms of the ability to integrate upstream and downstream of the supply chain, Samsung has its own chip, screen, storage, and assembly plants. External factors and even the Sino-US trade issues will have little or no effect on Samsung.

Of course, in some markets that Samsung is not focusing on, Xiaomi has certain advantages. For example, in Latin America, the Middle East, Africa, and other online channels, Xiaomi is leading the trend. In certain regions and certain markets, Xiaomi is moving closer to Samsung, and may even surpass Samsung. However, globally, this will be a very difficult goal.

6. The high-end market is important for the top spot

Right now, Samsung has all it takes to remain in the top spot. Huawei would have been the only company to battle Samsung. However, for obvious reasons, Huawei can not do that right now. Apple does not have a strong grip on the mid-range and entry-level market. This will make it difficult for it to rise.

Oppo and Vivo are very dependent on the Chinese smartphone market. For Oppo and Vivo, at least 50% of the shipments are from the Chinese market. It is important to note that Realme and OnePlus sales are not part of Oppo’s sales.

For Oppo, an important move in the second quarter is the return of OnePlus, which is easy to understand. Of course, integrating the supply chain, improving operational efficiency, and increasing profit margins should is the main reason for this. The company will eventually be a force to reckon with in China and globally.

8. Chinese market has a strong grip on the global market

Before the troubles with the U.S., Huawei was the second-largest smartphone maker behind only Samsung. In fact, after the initial ban on Huawei, the company still toppled Samsung to become the number one smartphone manufacturer in the world. The absence of Huawei and Honor has changed what the top 5 ranking looks like.

The smartphone market is changing very fast, with this new change every quarter. If Huawei wants to return, it must use another form. The company is still releasing 4G devices as well as IoT and HarmonyOS systems.

Honor is a new manufacturer and will need some time to make an impact in the market. A new company may not be able to learn in a short time, but Honor runs faster because it already knows how to operate channels, how to cooperate with operators. The company already understands the needs of consumers in different regions.

The lack of chips will affect the smartphone market next year. This is because if you place an order now, you won’t be able to get this product until next year. The good results of Xiaomi that we see now are largely due to its plan a year ago. Therefore, Xiaomi can have such a large supply in Q2, probably because it has made a high-growth strategy on low-end products a year ago

Other manufacturers did not make such plans thus there was a shortage in supply. However, this will not be the case for next year thus there will be changes.

Previous Xiaomi Mi Pad 5 To Miss MIUI 13 And To Come With MIUI 12.5 Instead