Electronics manufacturers are eager to surprise users with flexible displays. Nubia decided not to stay away from this fashion and two years ago released the Alpha smartwatch, which received a curved screen. The solution itself was positioned as a hybrid of a watch and a smartphone on the wrist. Such devices did not become widespread, but the idea was picked up.

A message came that Xiaomi wants to create a semblance of the Nubia Alpha. Within the company, they even held a presentation of the project, one of the participants of which uploaded photos from it to the network. It’s amazing how he managed to take a couple of shots from a closed meeting, the number of participants in which is limited and it is not difficult to figure out who could have been involved in the data leak.

Be that as it may, but the pictures give an understanding that the company is working on the Xiaomi Mi Band X, which will differ in the lightness and thinness of the case. It will offer a curved display with 360-degree scrolling, magnetic closure and some innovative color.

All over it turns out that Xiaomi Mi Band X will offer a curved display that will wrap around the entire wrist. A strap is not in need for such a product, and the smartwatch will be fixed with a magnetic clasp. No technical details are provided about the device. As well as there are no images of it. Most likely, this is just a concept and the company is at the beginning of the road, until the announcement of the Xiaomi Mi Band X is still far away. If it happens at all. 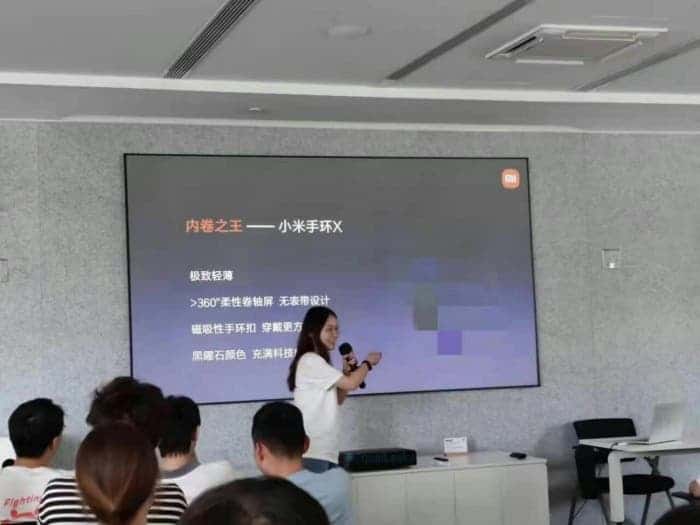 I think that no one doubts that Xiaomi will continue to increase the lineup of its smartphones; because the goal is to increase its share in the global market; and get the maximum benefit from the fall of Huawei. Already next month, we will have the announcement of Xiaomi Mi Mix 4; Xiaomi CC 11 and Xiaomi CC 11 Pro. This premiere season will not end, and the company is preparing for the release of two other smartphones with the codenames Lisa and Vili.

The last of the named models was spotted on the website of the US Federal Communications Commission (FCC). According to rumors, this will be a flagship device with a Snapdragon 888 chip; which is using a 5-nanometer process technology, has 8 cores with a peak frequency of 2.84 GHz. The smartphone has also a 120 Hz AMOLED display with a resolution of 2400×1080 pixels.

For the smartphone codenamed Lisa, they chose the Snapdragon 778G processor; which has eight computing cores with a peak frequency of 2.4 GHz. The screen here should be 90 Hz and on the back side they will offer a set of three sensors; where the main 64 MP Samsung ISOCELL GW3, there will be a wide-angle sensor and a sensor for macro photography.

Next Microsoft revenue rises 20% despite the declining sales of Windows