Counterpoint Technology Market Research has summed up the study of the global smartphone market in the second quarter of this year. Shipments by piece increased by 19% compared to the same period in 2020.

Over a three-month period, approximately 329 million smartphone devices were sold globally. The leader remains the South Korean giant Samsung with 57.9 million units sold and a share of about 18%. For comparison: a year earlier, the company controlled 22% of the industry.

The second place was taken by the Chinese Xiaomi, whose sales in comparison with the second quarter of 2020 almost doubled – by 98%. In three months, the company shipped 53 million smartphones. 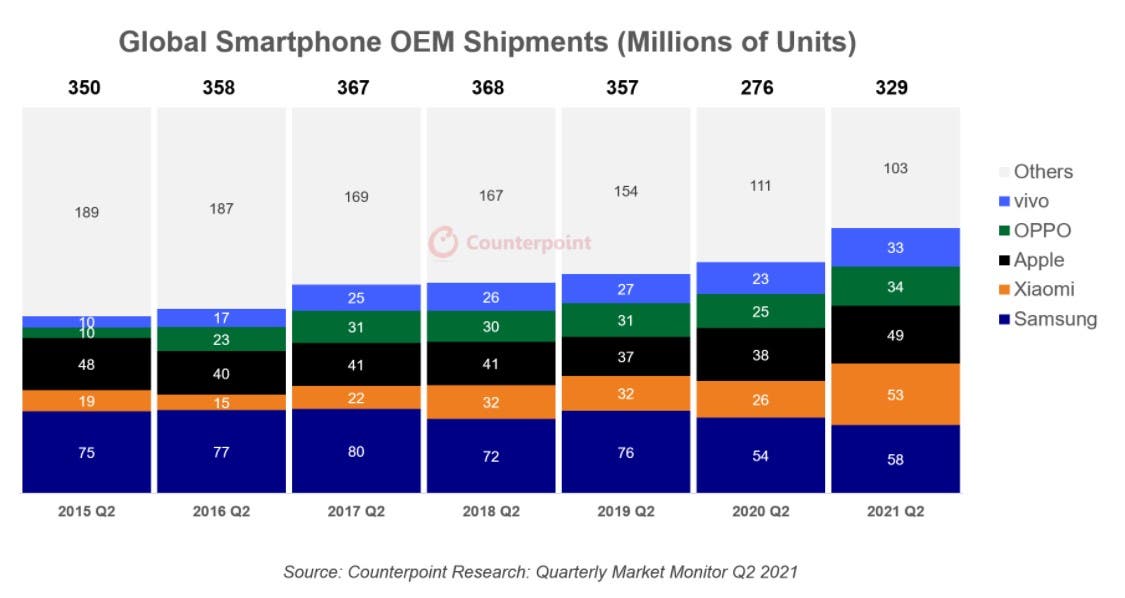 Closes the top three, Apple, which increased shipments on an annualized basis by 30% – to 48.9 million units. Next are the Chinese manufacturer Oppo and Vivo. The first of these companies sold 33.6 million devices during the last quarter, the second – 32.5 million.

The global smartphone market has grown and Samsung still the leader

Analysts also note that among other well-known suppliers of smartphones, OnePlus, Realme and Lenovo Group showed high growth rates. Shipments of devices of these companies increased compared to last year by 170%, 135% and 110%, respectively. 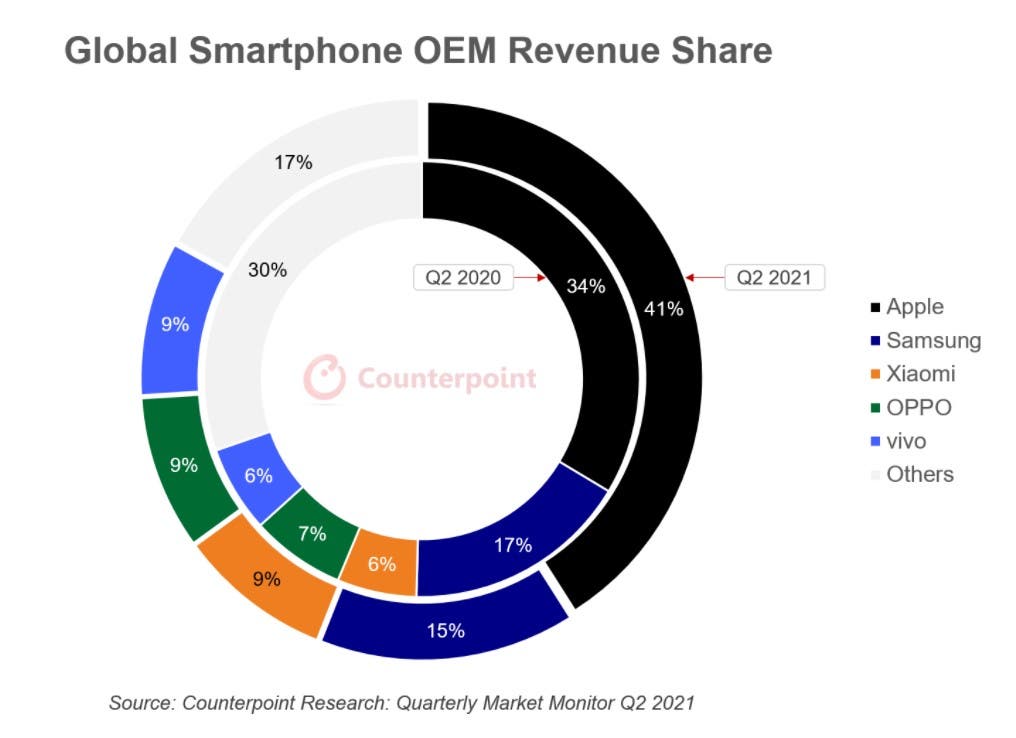 Commenting on OEM rankings, Research Director, Tarun Pathak noted, “While Samsung retained the top spot, its market share fell by over 3% to 18% in Q2 2021. Shipments were down due to weak seasonal demand in some of its key regions such as India, Central and Latin America and Southeast Asia followed by production disruption in Vietnam due to COVID-19. Xiaomi had its best-ever quarter as it was able to increase its market share in China, Southeast Asia and Europe. While Apple fell to the third spot, it captured record second-quarter shipments thanks to persistent demand and supply for its iPhone 12 series. OPPO and vivo retained their spots in the top five as OPPO continued expanding to overseas markets and vivo managed to lead the China market for the second quarter in a row.”

Highlighting the revenue dynamics, Research Analyst, Aman Chaudhary noted, “Global smartphone wholesale shipment revenues eclipsed $96 billion; up 25% YoY but declined 16% sequentially. This comes at a time when the industry was facing supply constraints. Apple captured a record second-quarter revenue share of 41% driven by continuing demand for the iPhone 12 Series followed by Samsung, OPPO, Xiaomi and vivo. However, Xiaomi had a strong quarter in terms of revenue as well; becoming the only brand within the top five to grow its revenue sequentially. It captured its highest-ever revenue share of over 9%; driven by the strong performance of Redmi Note and the Mi 11 series.”

Previous Almost 40% of owners turn off 5G in new smartphones

Next The UK filed a $ 1.3 billion lawsuit against Google over Play Store fees