Micromax was once one of the most relevant smartphone brands in India. However, the company lost a few of this relevancy when Chinese firms started to come with super appealing smartphones. The company had to put itself on a hiatus to rethink its strategies. Last year, Micromax took a ride on the Anti-China sentiment in the country to bring a series of Indian-centric smartphones for the entry-level segment. The new devices came under the Micromax In series. Today, the lineup is entering its second generation with the release of the Micromax In 2b. It arrives as a nice option for those looking for an entry-level device.

Micromax In 2B specifications and features

The Micromax In 2b packs a 6.52-inch IPS LCD screen with an HD+ resolution (1,400 x 720 pixels). The device comes with a waterdrop notch at the top that serves as a house for the selfie snapper. So far, Micromax has done a decent job with this screen since it comes with an 89 percent screen-to-body ratio. The panel offers 400 nits of brightness which is not bad for the entry-level segment.

Under the hood, the Micromax In 2b carries the Unisoc T610 chipset. For those unaware, this processor offers performance comparable to the MediaTek Helio G80 SoC. It comes with two ARM Cortex-A75 cores plus six power-efficient ARM Cortex-A55 cores. It also has a Mali-G52 MC2 GPU taking care of graphical tasks. The device is paired with 6 GB of RAM and 64 GB of Internal Storage. It runs Android 11 straight out of the box, but there is no word about future updates. 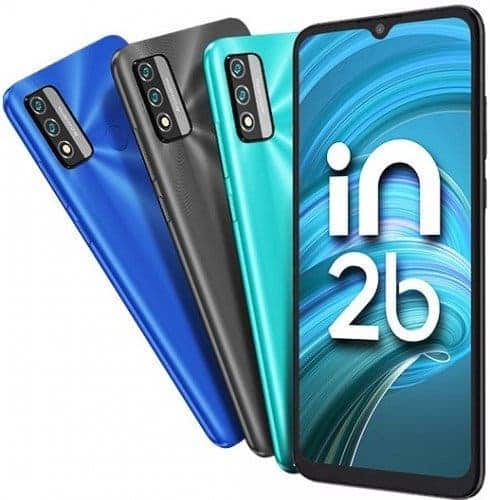 The Micromax In 2b draw powers from a 5,000 mAh battery. According to the firm, this is enough for 50 hours worth of talks or 15 hours of video streaming. The device packs a USB Type-C port, but it is limited to sluggish 10W charging. The device also has a rear-mounted fingerprint scanner and boasts AI Face unlock feature.

In terms of optics, the In 2b comes with a primary 13 MP snapper and a 2 MP depth sensor. The primary camera features night mode, portrait mode, and Auto HDR. For selfies, the device packs a 5 MP selfie snapper.

As an In (India) smartphone series, it will not leave the country. That said, there are two possible configurations. The variant with 4 GB of RAM and 64 GB of Internal Storage costs as little as INR 7,999 ($107). The other option has 6 GB of RAM and will set you back by INR 8,999 ($120). The device is available in three distinct colorways – Blue, Black, and Green. The device will go on sale starting August 6 via Flipkart.

Next Under-screen camera technology, which will be the best? Xiaomi, Samsung or ZTE?