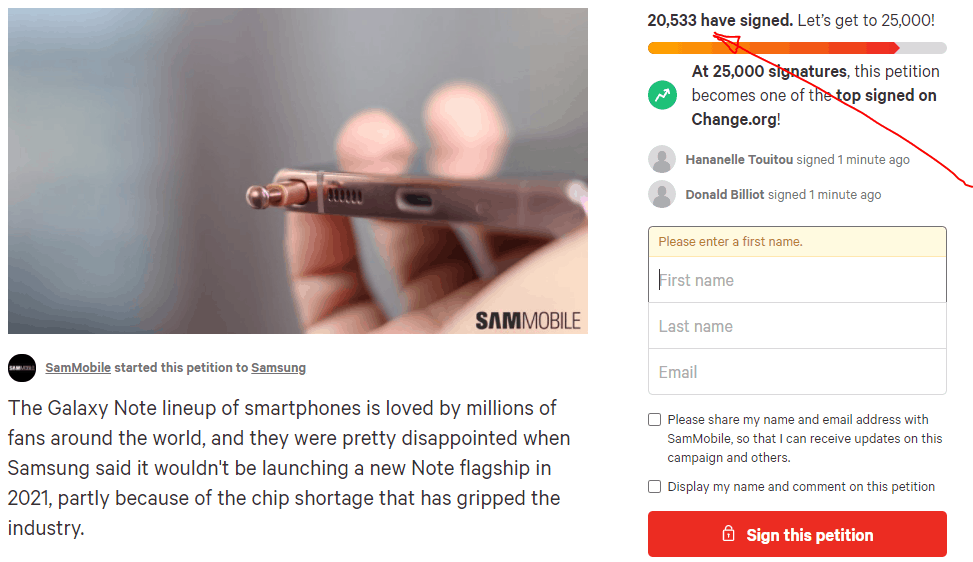 On July 31st, SamMobile launched a petition on change.org, hoping that Samsung will return the Galaxy Note series in the first half of 2022. This petition has been signed by over 20,000 fans as of the time of this report. According to reports, Samsung has not explicitly stated that it will discontinue the Galaxy Note series. Thus, we can not tell whether or not the company has plans for the Note series next year.

Samsung Electronics President and Head of Mobile Communications Division recently revealed that the Galaxy Note 21 series will not arrive this year. The company executive did not say anything about Samsung’s plan for the Note series. Whether or not Samsung will completely discontinue the Note series remains to be seen. However, the company will focus more on foldable smartphones in the coming years. Many of Samsung’s Note series features will be integrated into other series.

The first model in the Galaxy Note series hit the market in 2011. Over the past ten years, the Galaxy Note series focuses on the high-end flagship market. In the following years, Samsung gave the Note series the most luxurious configuration and attention. The series comes with all the top-notch features that the smartphone industry has to offer. However, recall that the Samsung Galaxy Note 7 had serious battery issues due to design faults. This caused the company to eventually recall the smartphone at a huge cost. Since then, consumers’ attitudes towards the Note series is not as high as before. The Galaxy Note 7 comes with a high-performance Snapdragon 820 processor. It also comes with the latest iris recognition technology at the time as well as a 2K resolution screen.

If Samsung officially announces the end of the Note series this year, the Samsung Galaxy Note series will come to an end in its tenth anniversary. Do you think Samsung will discontinue the Note series? Let us know your thoughts in the comment section below