The translation app developed by Google is one of the most useful applications – especially for those whose professional activities are related to the processing of documents in different languages. Its mobile version supports the use of a keyboard, microphone and camera to enter content, and it looks like the company will soon completely revise the program interface for the first time in several years.

Google will redesign the interface of its Translation app

Although Google Translate gets new features from time to time, such as transcribing speech to text in real-time, the developers have not updated the interface itself for a long time. It turns out that in the near future a new design option may appear; probably – primarily for new smartphones by Google itself.

Enthusiasts of the XDA Developers portal traditionally took apart the new APK-assembly of the software, Google Translate 6.21, which was released this weekend. It turned out that it contains a completely updated version of the interface; but when activated, it almost does not function (for example, most of the important buttons do not work). But you can roughly estimate how the product will look in the future.

Judging by the screenshots, the new interface provides more convenient one-handed operation; the buttons for calling the camera, microphone and switching languages ​​have moved to the bottom of the screen. The “hamburger” menu has disappeared – now it contains subsections like “Phrasebook”, “Saved Phrases”, “Offline Translation” and “Settings”. Apparently, these functions can be called using the “More” (More) button located in the lower-left corner. The screenshot on the left displays the current version of the interface.

According to XDA Developers, it is highly likely that the new version will only be available for Google Pixel 2021 smartphones; in particular, for the yet-to-be-released Pixel 6 on Android 12. Exclusive features and interfaces are common on the company’s branded devices. 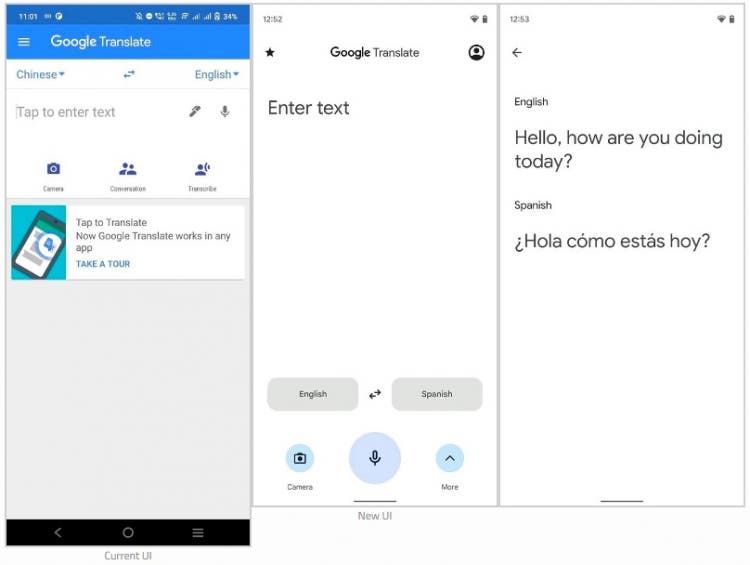 Despite the fact that Android 12 has already grown to the third beta version, it does not differ at all in stability. So, Android 12 beta 3 users are well aware of its three main problems. Graphical interface failures, frequent closing of programs running in the background; and, most unpleasant, a cyclic reboot of the smartphone.

Android 12 beta 3.1 removes all three, with the update being over-the-air only 738KB in size. Apparently, there will be no more updates to Android 12 before the release of the fourth beta version; it should launch in mid – late August. Android 12 beta 4 should be the most stable version of the OS before the launch of the final version.