It took a while, but Honor finally managed to bring something consistent since its separation from Huawei. Back in the last month, the company introduced the Honor 50 series, but this is just the beginning! As per reports, the company is now prepping up to introduce the Honor Magic 3 series in China. Honor’s CEO George Zhao recently teased the device’s rear panel. Interestingly, the device will bring a design language that resembles the Huawei Mate 40 series. However, it packs a Penta-camera setup and shows cutouts for the microphone, LED flash and etc. So far, other details about this smartphone haven’t been confirmed. Now, ahead of the launch, a smartphone belonging to the Honor Magic 3 series has visited the GeekBench benchmark website.

Honor is expected to reveal its Honor Magic 3 series on August 12. Now, ahead of the release, a smartphone expected to come under this series has passed by the Geekbench benchmark. The popular benchmarking platform confirms that the smartphone will draw power from a Qualcomm Snapdragon 888 Plus SoC. The Plus variant gets two major performance improvements. The SoC’s prime core CPU gets boosted to 2.995GHz, compared to the 2.84 GHz on the Snapdragon 888 SoC. The new high-end chip also has a 20% improvement in AI performance over its predecessor. The GPU still is the Adreno 660 GPU. 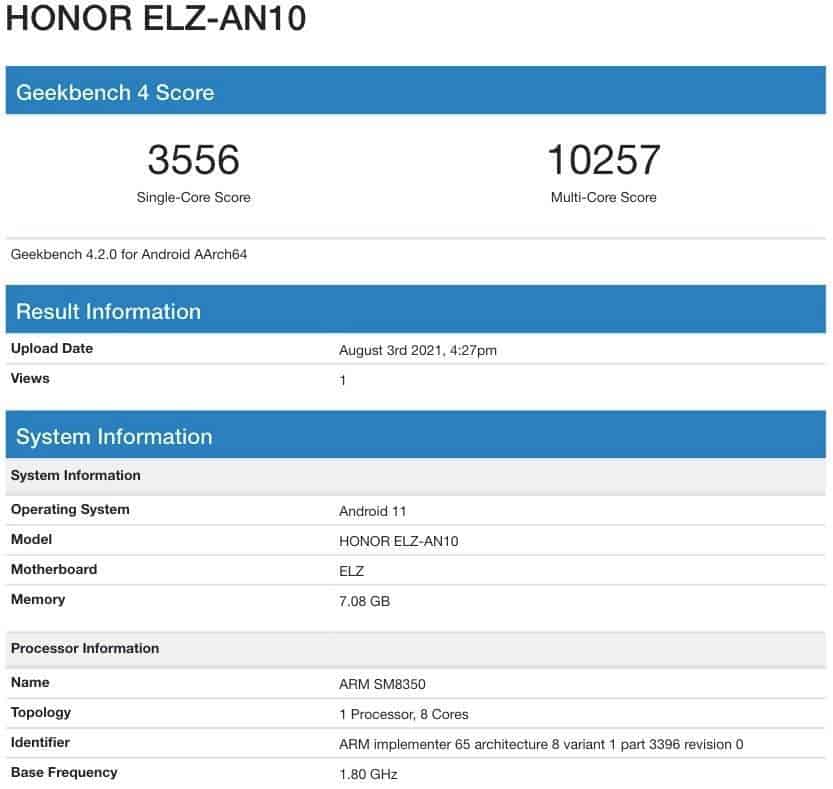 The device runs on Geekbench 4 and has the model number ELZ-AN10. The handset runs with 8 GB of RAM and has Android 11 straight out of the box. That’s right! The new flagships will come with Android 11 and we can expect Google Mobile Services on the global variants. Of course, the devices will likely come with Honor’s custom Android skin. The Geekbench 4 listing gives 3,556 points to the single-core tests and 10,257 for the multi-core department.

As per the design renders, the smartphone will have a curved screen with a 90 Hz or 120 Hz of refresh rate. We can expect Full HD+ or even a QHD+ resolution. It will also have a pill-shaped hole punch cutout for a dual-camera setup on the front. We can also expect a big battery to be inside the smartphone with fast-charging technology in tow.

According to rumors, the new refreshed Honor Magic series will also include a foldable smartphone. There will be an Honor Magic Fold smartphone with a display size of 8-inches. Rumors also suggest the release of an Honor Magic Flip, but we can’t confirm if these devices will be present at this August 13 event.