Last week, we reported that more and more users are choosing Xiaomi smartphones and the company occupies the second position in the global table of smartphone manufacturers. And now it is also on the first line in the supply of smartphones in the second quarter in Europe.

For the first time, Xiaomi was able to push Samsung to the second line; which controls 24% of the European market and has 12 million mobile phones shipped. Users are increasingly preferring competing smartphones over Samsung. The company became the only one in the top 5, whose supplies dropped by 7%.

A successful second quarter of 2021 was for Realme; which managed to grow smartphone shipments by an impressive 1800% year on year. The company’s share is 3.8%, and it became the fifth in Europe, with 1.9 million units supplied to the market. Oppo has 2.8 million delivered devices; which allowed it to take the fourth line of the rating with a share of 5.6%.

The third place belongs to Apple with 9.6 million iPhones shipped. The increase was 15.7%. In total, in the second quarter of 2021, 50.1 million smartphones were shipped to the European market. 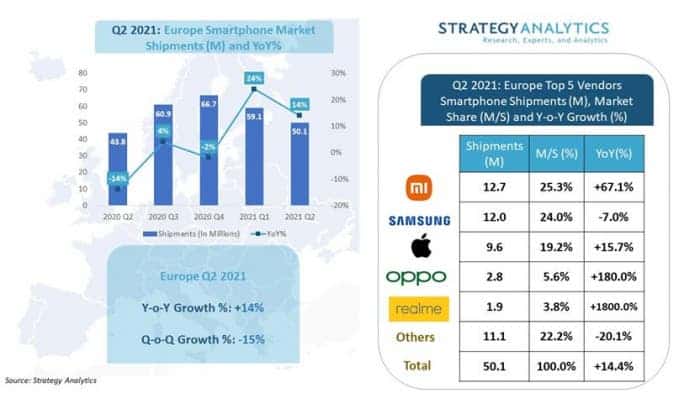 Xiaomi has named the date of the announcement of Xiaomi Mi Mix 4, Xiaomi Mi Pad 5 and other new products

If July was stingy with new devices, then August promises us some interesting premieres. Moreover, the releases will take place in a heap, one after another. On August 10, Xiaomi will hold a large-scale event; where it will show Xiaomi Mi Mix 4, a series of Xiaomi Mi Pad 5 tablets and other devices.

The fact that the day before Galaxy Unpacked, Xiaomi should present its new products was announced today by the head of the company Lei Jun, who announced that on August 10 he will make a public speech, where he will tell about the company’s new products. There should be 15 new products in total.

As part of his speech, Lei Jun will also talk about how the company got the second place in the world ranking of smartphone manufacturers, getting into the top 500 largest companies according to Fortune magazine and other achievements, as well as the challenges facing the company.

We already know for sure that the Xiaomi CC 11 series will not be among the debutants. The product manager of the company, Wei Sichi is saying that the they will not present the new family in August, it will launch later.