On August 10th, Xiaomi CEO, Lei Jun, will hold the “2021 Lei Jun Annual Speech”. At this event, he will officially reveal the “10 most difficult choices of Lei Jun”. This afternoon, Lei Jun said on his personal Weibo that many friends are asking a lot of questions regarding this speech. Regarding the question of whether MIUI 13 will be announced in this speech, Lei Jun had a subtle response. According to him, the MIUI team accepts everyone’s suggestions and first concentrates on polishing the core experience. The team is also focusing on solving basic experience issues. 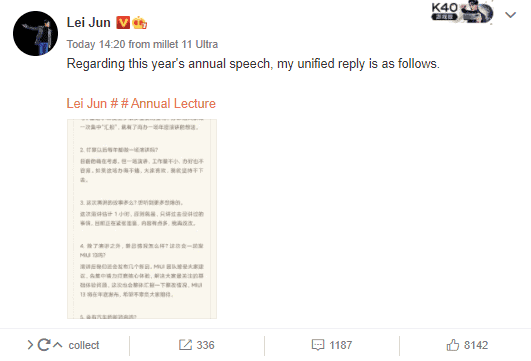 MIUI 13 to launch at the end of the year

He concluded his statement by saying “MIUI 13 will be released at the end of the year, and I hope it will live up to everyone’s expectations”. The “end of the year” comment is actually not a “date”. However, it gives us an official clue as to when MIUI 13 will arrive. We are now certain that there will be no official information on MIUI 13 this month.

There have been reports that the MIUI 13 system will arrive with the Xiaomi Mi MIX 4. However, this has since been debunked. Xiaomi has a lot of work to do on the MIUI 13 considering the flops of MIUI 12. Thus, the company will not want to release this system prematurely.

There were also questions on whether or not Lei Jun will announce Xiaomi automobiles in the speech. Lei Jun said that “we are intensively advancing the automobile project. It is still in the very early stage, and we will report back to you when we have made significant progress”. This shows that there will be no automobile announcement.

It is worth mentioning that Lei Jun also replied why he made this annual speech. He said that he gave the first public speech in his life last year, and many Mi Fan friends would like to hear him tell more about Xiaomi’s stories and some of his recent thoughts. Recently, Xiaomi has undergone many important changes. Lei Jun plans to give fans a central report and this is why he is holding another annual speech.

Not long ago, the Xiaomi MIUI team set up a pioneer team to fix various bugs and complaints coming from users. According to many user feedbacks, with the efforts of the MIUI pioneer team for several weeks, the current lagging and issues of many models have significantly reduced. The fluency and stability of the system are now gradually increasing.

Previous Xiaomi is number one in Europe for the first time