The developers of the popular messenger WhatsApp continue to add new features that may be useful in certain situations. This time, users have the opportunity to send disappearing images, which the recipient can view only once.

The new feature is called “view once” and it assumes that after viewing the image, it will be automatically removed from the chat. In addition, such images will not appear in the chat as a preview, and the recipient will not be able to download it to the device. To use the new tool, a button with a timer image has been added to the message settings panel before sending, after clicking on which the image is marked for automatic deletion after viewing.

The developers believe that the “view once” function will be useful; if users need to share some personal or potentially confidential information; for example, a Wi-Fi password written on paper. As always, users should be wary of such tools and remember that they do not guarantee complete confidentiality. The recipient can take a screenshot when opening the image for a single view; and the service will not notify the sender if this is done. 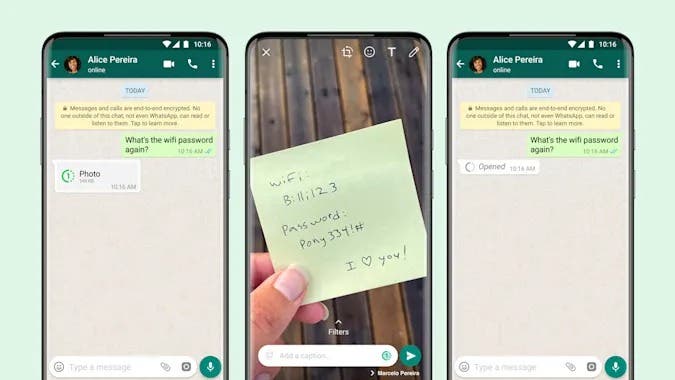 Facebook is exploring ways to parse encrypted data; such as WhatsApp messages, without actually decrypting the information, according to a new report from The Information. In this way, the company wants to establish new data collection channels for showing targeted advertising to users.

According to The Information, Facebook is creating a team of artificial intelligence researchers to “explore ways to analyze encrypted data without decrypting it”. These methods will be based on homomorphic encryption algorithms; and will allow companies to read information from encrypted data packets, while maintaining the confidentiality of user correspondence.

According to a list of vacancies on the website, Facebook continues to recruit a new team of researchers with expertise in technologies related to privacy, homomorphic encryption, secure computing and online anonymity. Facebook indicates that the team will work to ” improve the performance of Facebook’s market-leading ad systems .”

The Information suggests that homomorphic encryption may be Facebook’s response to growing concerns from lawmakers and regulators about the privacy of users of the platform and its relationship to Facebook’s advertising business model. We assume that they ca, avoid problems by collecting information from messages without fully decrypting them.

However, netizens are angry at Facebook’s plans. They share concerns that the social network will gain access to even more of their personal data. In addition, some argue that analyzing encrypted messages for the purpose of serving ads completely contradicts Facebook’s claim; that it will never be able to access user conversations. The announcement comes amid growing dissatisfaction with WhatsApp’s new privacy policy, which took place earlier this year.