Several months have passed since the arrival of the iQOO 7 series. Now, Vivo’s sub-brand is preparing the arrival of a new hardware-centric smartphone, the iQOO 8. The new iQOO 8 will reach the Chinese market on August 17. Almost a week before the release, the whole spec sheet for the new smartphone has been revealed. iQOO is confirming the design of the new smartphone as well as some of its key specifications. As expected, there will be a vanilla iQOO 8 and an iQOO 8 Pro variant sporting a BMW Edition design. 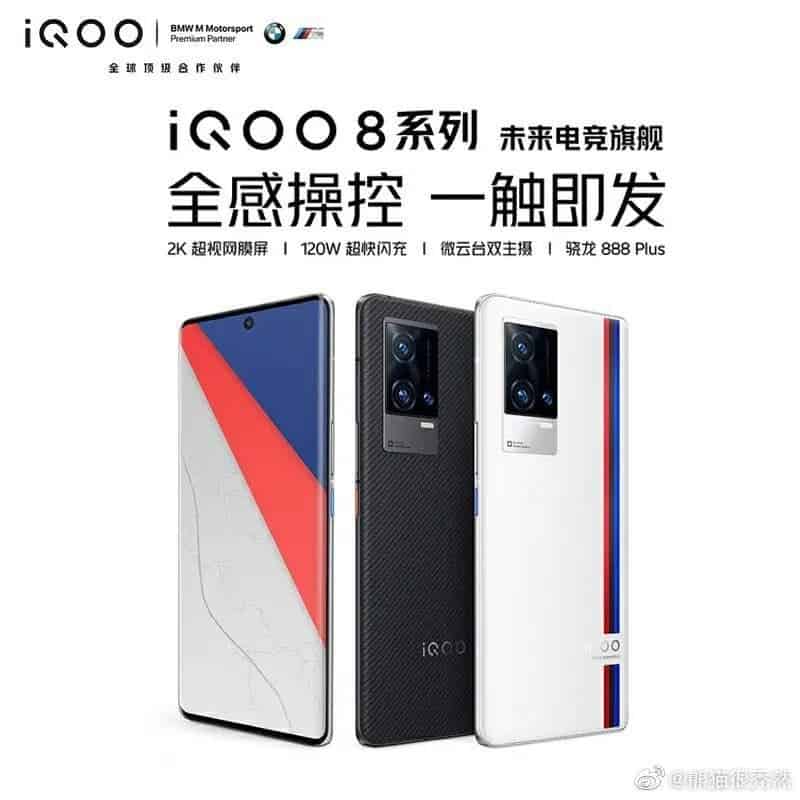 The iQOO 8 Pro will come with three vertical stripes in shades of Blue, Red, and Black. The device will also come in a special Black colorway with a Carbon Fibre-like texture on the back. Worth noting that the camera module design has changed this time around as well as the iQOO logo’s placement.

The iQOO 8 Pro features a 2K display with a punch-hole cutout. According to a previous report, this is a Samsung E5 AMOLED display with LTPO (Low-Temperature Polycrystalline Oxide) technology. It allows a variable refresh rate support that switches between 1 Hz and 120 Hz depending on the on-screen content. Unfortunately, the company did not reveal the display’s size at the moment.

Under the hood, we have an overclocked Qualcomm Snapdragon 888+ SoC. The new upgraded version of SD888 brings a new Prime Core clocked at up to 3GHz, an Adreno 660 GPU and a Snapdragon X60 5G modem offering data rates up to 7.5 Gbps.

The new Qualcomm flagship platform will come with up to 12 GB of RAM and support for virtual 4 GB RAM. Since it comes with the Extended RAM feature it’s easy to assume that the device runs Origin OS 1.0, based on Android 11, straight out of the box. In terms of storage, we expect a variant with 256 GB of Internal Storage.

In addition to the appealing hardware, the iQOO 8 Pro will come with a whopping 120 W fast-charging. Unfortunately, we don’t know the battery capacity. However, with this charging, we can assume that it will take less than an hour to be fully replenished.

Interestingly, the iQOO 8 was present at ChinaJoy’s conference. During the event, many of the visitors were able to test the new flagship at iQOO’s booth. Of course, the device was covered by a special cover that completely hides the design. However, it was enough to confirm the curved display with a centered punch-hole and a triple-camera setup at the back.