iQOO is heading to Malaysia to establish its “official presence” in the local market. The Vivo sub-brand is preparing quite a party, and that party will count toward the launch of the iQOO 11 series. We don’t know if all phones will be landing there, but apparently, a very interesting flagship will attend the party. iQOO itself has confirmed the launch of the iQOO 11 in the country.

So far the company has not confirmed the launch date but is slowly spilling out some details about the phone. According to them, the iQOO 11 will bring the newest Qualcomm Snapdragon 8 Gen 2 SoC to the box. We know that the Vivo X90 series will be among the first phones with the Snapdragon 8 Gen 2. Now, we know that the company has amassed enough units for its sub-brand as well. The iQOO 11 will reach the market in all its glory with the newest chipset. 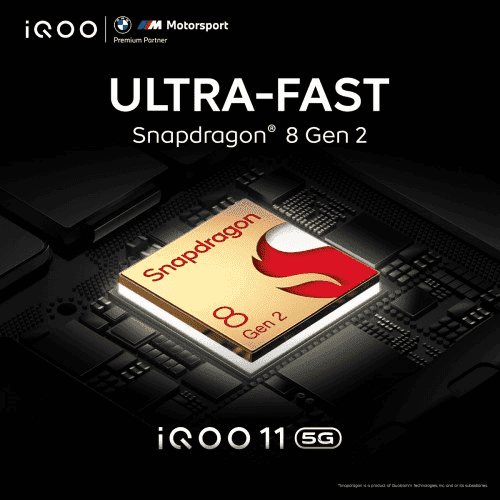 According to a report from GSMArena, the iQOO 11 Pro also has the Qualcomm Snapdragon 8 Gen 2 SoC. The phone will land in India in January. It also has a 6.78-inch Samsung E6 AMOLED screen and will run Android 13 straight out of the box. As per the rumors, the phone will retain the BMW M Motorsport design. Moreover, it will have the Vivo V2 custom chip. To those unaware, the Vivo V2 is Vivo’s latest custom ISP with a lot of improvements for the camera. It’s interesting to see it reaching the iQOO 11 series. After all, photography was not a focus of this lineup.

Worth noting, that the iQOO 11 Pro may not be the exact option for the Malaysian market. After all, even the vanilla has the Snapdragon 8 Gen 2 and may have the V2 as well. The rumored iQOO 11 passed on Geekbench with the Snapdragon 8 Gen 2 and 12 GB RAM. However, there is a twist. As per the report, the Malaysian unit has model number I2212, while the one that ran Geekbench has a V2243A designation. So in the end, we may see different versions with the same name.

Next Lenovo Tab Extreme: a powerful tablet with Dimensity 9000

iQOO Neo 7 SE battery and charging speed have been confirmed