Samsung is gearing up to hold its annual Galaxy Unpacked event on August 11. This year’s edition will not bring a new Galaxy Note smartphone either a Galaxy S smartphone. Instead, the company will introduce new foldable handsets in the form of Galaxy Z Fold3 and Galaxy Z Flip3. The highly-anticipated Galaxy S21 FE won’t appear during the event, but apparently, its launch is also nearing the shores. The new “Fan Edition” of the Galaxy S21 made a brief appearance in a back-to-school ad. The device appears alongside a Galaxy Book Book and Galaxy Buds Pro earphones.

Rumors have been suggesting the Galaxy S21 FE for the Galaxy Unpacked. However, the device was reportedly delayed by Samsung. The Korean firm will wait until October to disclose the new flagship. As per the leaks that have been circulating through the web, the new FE smartphone will carry a 6.4-inch Super AMOLED display with a 120 Hz refresh rate. We expect this panel to be based on LTPO technology ensuring an adaptive refresh rate that can switch between 1 Hz and 120 Hz depending on what is being displayed. 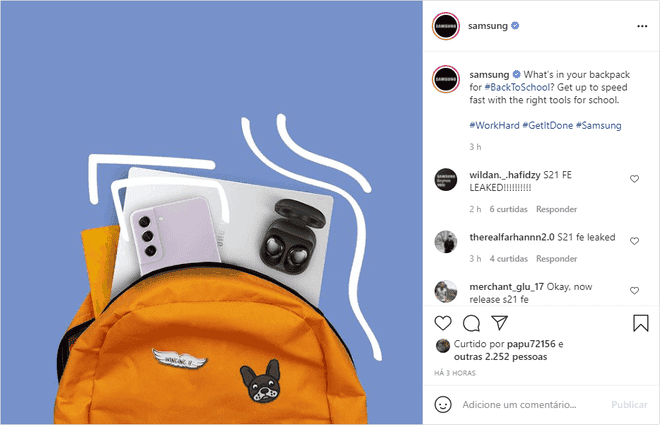 In addition to the top-notch display, the handset will come with Qualcomm Snapdragon 888. However, variants with the Exynos 2100 SoC are also expected. The lights will be kept by a 4,500 mAh battery, but we don’t have high aspirations regarding the charging technology. We believe that Android 12 will already be here in October. However, the device will likely come with Android 11-based One UI 3.1 since it is already in development.  Unfortunately, this is everything we know about the new Galaxy S21 FE at the moment.

As per the report, the device in the ad can be a Galaxy S21 or Galaxy S21+ with a new paint job. However, we don’t think that Samsung will go through the whole process of launching a new version that just has a different camera island. The fact that the post is no longer available, also confirms our belief that the device in question really is the S21 FE.

The company will be focusing on new launches with the Galaxy Z Fold3 and Z Flip3, and we assume it will not re-visit the S21 series. Instead, it will release a new variant for this year’s flagship lineup.

The Galaxy S20 FE was a huge success for Samsung. We expect the Galaxy S21 FE to also sell well. After all, users in the “standard smartphone” segment will be missing a new Galaxy Note smartphone.

Next Xiaomi Mi 11T With MediaTek Dimensity Chip Gets Certified

Galaxy S21 FE launch is at risk: Only 10,000 units produced in September