Last week Google made a small announcement with its Pixel 6 and Pixel 6 Pro. The company posted a picture of the new products, and also told what their greatness is. A key feature of the engineering triumph should be Google’s own Tensor chip. They did not devote themselves to the technical details of the processor; limiting themselves only to the statement that advanced AI algorithms are offered here.

Also, the Google Pixel 6 and Pixel 6 Pro have thoroughly upgraded the design and cameras. All this will ultimately allow new products to become an event on the market. The degree of expectation is high. All these innovations, of course, will affect the price list, and one of the top managers of Google has already stated that the new devices will be expensive. But how much? And how much are users willing to pay for them based on the available information about the smartphones?

How much are users willing to pay for the Google Pixel 6 Pro?

There were also those who consider the flagship price tag at $ 1000-1199 to be quite fair. Such turned out to be 19.39% of all respondents. Among all the participants in the survey; there were 6.22% of those who are ready to give more than $ 1200 for the Google Pixel 6 Pro. It remains for us to wait for the autumn presentation in order to understand how much the company will actually ask for its new products and whether they are worth their money. 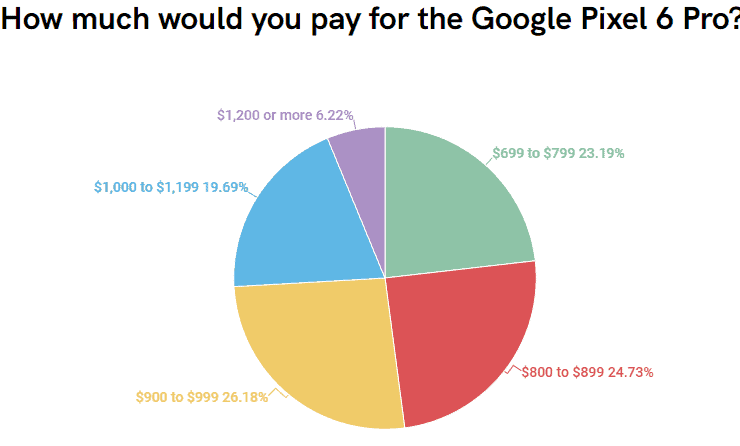 Google Pixel 5a smartphone will be presented in the coming weeks

Recently, a message has come that the announcement of the Google Pixel 5a smartphone will be arranged at the end of the summer. The release date is August 26, 2021. This year it will be released only in a version with support for fifth-generation networks; and the price tag will be at $ 450.

Regarding the Google Pixel 5a, we know that it will offer a 6.4-inch FullHD + display, a Snapdragon 765G chipset, 6GB of RAM and 128GB of internal storage. According to rumors, the smartphone will be powered by a 4650 mAh battery, a 3.5 mm headphone jack and IP67 dust and moisture protection.

Wireless charging will not be offered, and the screen will not have an increased frame rate. The main camera will be dual, where a 12-megapixel module will act as the main one; and an ultra-wide 16-megapixel will help it.